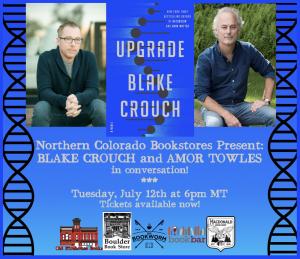 The Bookworm is thrilled to partner with Old Firehouse Books, Boulder Bookstore, Book Bar, and the Estes Valley Library via Macdonald Bookshop to virtually host Blake Crouch in conversation with Amor Towles in celebration of Crouch's new book Upgrade! The event will take place on Tuesday, July 12th at 6:00pm MT on Zoom. Each event ticket purchase comes with a copy of the book, Upgrade, and one unique link to access the event. Access links will be sent 24 hours before the event. Signed book plates will be available for those who purchase a ticket!

At first, Logan Ramsay isn’t sure if anything’s different. He just feels a little . . . sharper. Better able to concentrate. Better at multitasking. Reading a bit faster, memorizing better, needing less sleep. But before long, he can’t deny it: Something’s happening to his brain. To his body. He’s starting to see the world, and those around him—even those he loves most—in whole new ways. The truth is, Logan’s genome has been hacked. And there’s a reason he’s been targeted for this upgrade. A reason that goes back decades to the darkest part of his past, and a horrific family legacy. Worse still, what’s happening to him is just the first step in a much larger plan, one that will inflict the same changes on humanity at large—at a terrifying cost. Because of his new abilities, Logan’s the one person in the world capable of stopping what’s been set in motion. But to have a chance at winning this war, he’ll have to become something other than himself. Maybe even something other than human. And even as he’s fighting, he can’t help wondering: what if humanity’s only hope for a future really does lie in engineering our own evolution? Intimate in scale yet epic in scope, Upgrade is an intricately plotted, lightning-fast tale that charts one man’s thrilling transformation, even as it asks us to ponder the limits of our humanity—and our boundless potential.

Blake Crouch is a bestselling novelist and screenwriter. His novels include Recursion, Dark Matter, and the Wayward Pines trilogy, which was adapted into a television series for FOX. Crouch also co-created the TNT show Good Behavior, based on his Letty Dobesh novellas. He lives in Colorado.

Amor Towles is the author of the New York Times bestsellers Rules of Civility, A Gentleman in Moscow, and The Lincoln Highway. The novels have collectively sold more than five million copies and have been translated into more than thirty languages. Towles lives in Manhattan with his wife and two children.

Rules of Civility: A Novel (Paperback)

A Gentleman in Moscow: A Novel (Paperback)

The Lincoln Highway: A Novel (Hardcover)