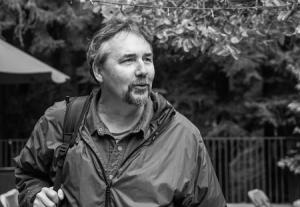 When the pandemic struck, nature writer David Gessner turned to Henry David Thoreau for lessons on how to live. Those lessons--of learning our own backyard, re-wilding, loving nature, self-reliance, and civil disobedience--hold a secret that could help save us as we face the greater crisis of climate. Gessner once again examines the relationship between humans and the world around them, in his typical captivating prose.

David Gessner is the author of eleven books that blend a love of nature, humor, memoir, and environmentalism, including "Leave it As it Is: A Journey Through Theodore Roosevelt's American Wilderness" and the New York Times-bestselling "All the Wild That Remains: Edward Abbey," "Wallace Stegner and the American West" and the prize-winning "The Tarball Chronicles." In 2003 Gessner taught environmental writing as a Briggs-Copeland Lecturer at Harvard, and he now serves as chair of the Creative Writing Department at the University of North Carolina Wilmington, where he is also the founder and editor-in-chief of the literary magazine Ecotone. His prizes include a Pushcart Prize, the John Burroughs Award for Best Nature Essay, the Association for Study of Literature and the Environment's award for Best Book of Creative Writing, and the Reed Award for Best Book on the Southern Environment. In 2017 he hosted the National Geographic Explorer show, The Call of the Wild. Gessner lives in Wilmington, North Carolina, with his wife, the novelist Nina de Gramont, and their daughter, Hadley.

Quiet Desperation, Savage Delight: Sheltering with Thoreau in the Age of Crisis (Paperback)

Leave It As It Is: A Journey Through Theodore Roosevelt's American Wilderness (Hardcover)

All The Wild That Remains: Edward Abbey, Wallace Stegner, and the American West (Paperback)