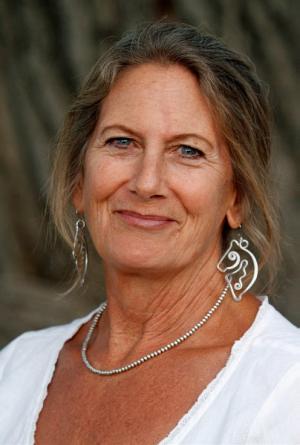 Join Colorado author, Kathryn Wilder, as she speaks about and signs copies of her new book, Desert Chrome, a powerful story of grief, motherhood, and return to the desert entwined with the story of America's mustangs. This memoir illuminates these controversial creatures--their complex history in the Americas, their powerful presence on the landscape, and ways to help both horses and habitats stay wild in the arid West--and celebrates the animal nature in us all.

In Desert Chrome: Water, a Woman, and Wild Horses in the West, Kathryn Wilder weaves her personal story with the story of America’s mustangs. Living in Hawai‘i, immersed in a deep-rooted love for the ocean and a relationship with a local activist, when three key people in her life die she turns to the Colorado Plateau—with its sagebrush steppes, deep canyons, and desert rivers—which she knows as “country big enough to hold sorrow.” Searching for grounding within grief, Wilder grapples with a former heroin addiction and the haunting loss of custody of her two sons before mustangs show her the way out of lost. She ends up in southwestern Colorado on property bordering a mustang herd; there she finds connection, friendship, and a new sense of purpose among people who, like her, are magnetically drawn to the wild horses who share their desert home.

Kathryn Wilder’s work, cited in Best American Essays and nominated for a PEN America Literary Award and the Pushcart Prize, has appeared in such publications as High Desert Journal, River Teeth, Fourth Genre, Sierra, and many anthologies and Hawai‘i magazines. Wilder is editor of Walking the Twilight: Women Writers of the Southwest volumes I and II, and author, with Redwing T. Nez, of the children’s book Forbidden Talent, a Spur Storyteller Award finalist. Past finalist for the Ellen Meloy Fund Desert Writers Award, Wilder holds an Master of Fine Arts degree from the Institute of American Indian Arts. She lives among mustangs in southwestern Colorado.

Desert Chrome: Water, a Woman, and Wild Horses in the West (Paperback)