The Starseed Signals: A RAW Perspective on Timothy Leary (Paperback) 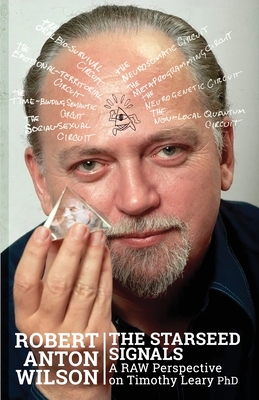 In 1974, Robert Anton Wilson wrote a book about the ideas and tribulations of his friend, Dr. Timothy Leary. Intriguingly, this book would not be published until some 46 years later, having been put aside and then lost for decades. In 1986, RAW wrote The New Inquisition which had as a partial focus the persecution of Timothy Leary and Wilhelm Reich. In some respects, The Starseed Signals seems like an earlier attempt to address that same kind of injustice, as the book was written while Leary was experiencing an inquisition, a victim of the Nixon administration and the general punitive zeitgeist.

In his introduction to the book, John Higgs writes,

"What's remarkable about this previously lost and unpublished-until-now manuscript is not only that RAW puts forward the case for Leary's ideas, but he does so at the time when Leary's reputation was at its lowest. The sixties were over, and the paranoia of the 70s had begun. Leary was yesterday's man, lost somewhere deep within the American prison system, denounced by former friends and rumoured to be snitching on the entire counterculture."

RAW addresses Leary's troubles with insights that will intrigue historians, while also offering delights for those who value Leary's many contributions to various fields in the social sciences. Of particular note is RAW's early description of the Eight Circuits Model of Consciousness, which we learn had been a collaborative effort between the two friends.