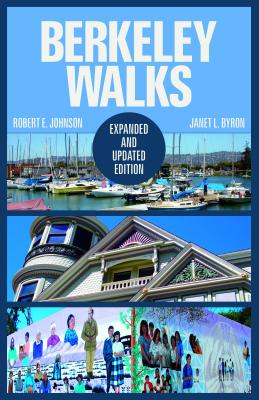 By Robert E. Johnson, Janet L. Byron
Email or call for price.
Out of Print

Berkeley Walks celebrates the things that make Berkeley such a wonderful walking city: diverse architecture, panoramic views, tree-lined neighborhoods, historic homes, unusual gardens, secret pathways, hidden parks, vibrant street life, trend-setting restaurants, and intriguing history. Fascinating and surprising sidelights include the apartment building from which Patty Hearst was kidnapped; Ted Kaczynski's home before he became the Unabomber; and the residences of Nobel laureates and literary Berkeleyans such as Thornton Wilder, Ann Rice, and Philip K. Dick. Bob Johnson and Janet Byron, longtime city residents and tour guides, designed these 21 walks to showcase the many elements that make Berkeley's neighborhoods, shopping districts, and academic areas such fun to explore. Visitors will discover a vibrant community beyond the University of California campus borders, while locals will be surprised and delighted by the treasures in their own backyards. Highlights of the book include a focus on architects Joseph Esherick, John Galen Howard, Bernard Maybeck, Julia Morgan, James Plachek, Walter Ratcliff, Jr., and John Hudson Thomas, 100 archival and original photos, and 22 maps, including a map of Berkeley bookstores.

An avid walker and hiker, Robert E. Johnson has lived in Berkeley for more than 30 years. He leads walking tours around the Bay Area for groups such as Greenbelt Alliance (where he is a board member), Berkeley Path Wanderers, and the Berkeley Historical Society. Janet L. Byron has lived in Berkeley for 25 years and is an enthusiastic hiker, jogger, and bicyclist. She has led walks for Greenbelt Alliance, Berkeley Path Wanderers Association, and other local groups.