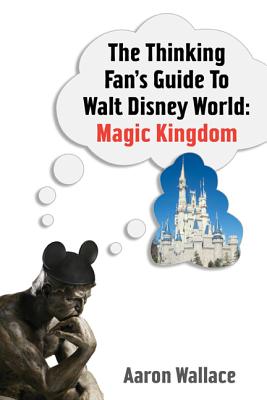 By Aaron Wallace
Email or call for price.
Hard to Find

The Thinking Fan's Guide is different kind of guidebook for a different kind of theme park experience. Aaron Wallace avoids the ephemera of prices and menus to explore the heart of the Disney experience, the attractions themselves. He provides a lighthearted but scholarly look at the history, lore, and literature that inform the designs and storylines of every ride and attraction in the Magic Kingdom's Adventureland, Frontierland, Liberty Square, Fantasyland, and Tomorrowland, as well as the Walt Disney World Railroad, the Sorcerers of the Magic Kingdom game, the Celebrate a Dream Come True and SpectroMagic parades, the Wishes fireworks show, and Main Street, U.S.A. itself. Far from being mere amusements, these 36 attractions provide a complex, multi-layered narrative that can be experienced and appreciated just like a great novel, play, or film. The Thinking Fan's Guide will fascinate Disney buffs with the sometimes surprising insights it offers into old favorites while offering newcomers to the Disney magic a much richer experience. If you are ready to immerse yourself in the magnificent achievement that is Walt Disney World's Magic Kingdom, this is the guide for you.

Aaron Wallace, who lives in Orlando, Florida, has always had a passion for Disney, from movies to theme parks and everything in between. He first started thinking critically about the company s artistic output during his time at The University of North Carolina at Chapel Hill, where he earned a Bachelor of Arts degree in both Communication Studies (with a concentration in Media Studies) and English. Today, Aaron is a writer and an attorney, having earned a Juris Doctor degree from Wake Forest University. He is also a professional film and media critic, who has published more than two hundred movie, television, and music reviews to an audience of millions. Since 2004, Aaron been a part of the writing staff at DVDizzy.com, one of the Internet s most-accessed sites for entertainment journalism. In addition to writing, Aaron hosts Zip-A-Dee-Doo-Pod, the web s second-longest-running non-commercial podcast dedicated entirely to Disney. He also appears as a regular co-host on The Hub Podcast, another popular show devoted to having fun with Disney. Aaron visits the Walt Disney World Resort on at least a weekly basis and tweets his adventures on his Twitter page, @aaronspod. His website is available at www.AaronWallaceOnline.com."