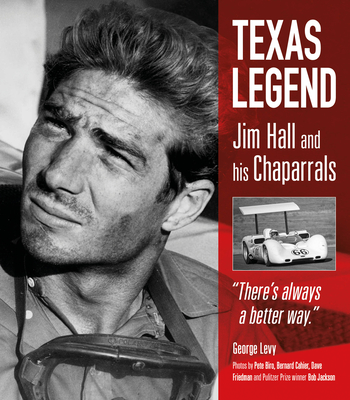 One of the greatest drivers of his generation, Jim Hall is even better known as an innovator. From his tiny shop in Midland, Texas, emerged a series of Chaparrals that changed the face of racing. His high-winged Chaparral 2E Can-Am car and 2F World Sportscar Championship contender may be the most influential race vehicles of the 20th century. Today, every Formula 1 car uses net downforce, driver-adjustable wings, composite chassis, side-mounted radiators, semi-automatic gearboxes and advanced telemetry to optimize vehicle performance — all things Hall pioneered in the mid-1960s. In Texas Legend, Jim Hall tells his story — his life, his cars, his relationship with Chevrolet, his battles with sanctioning body bureaucracies — for the first time to award-winning author George Levy in this authorized biography.

After a distinguished career as a motorsports author, speaker and historian, George Levy is now President of the Motorsports Hall of Fame of America, based at Daytona Beach, Florida. He began his journalism career in 1980 at Autoweek, where he rose to editor at 27. He has also contributed to RACER, Car and Driver and Vintage Motorsport. Latterly he has turned to writing books and is best known for Can-Am 50th Anniversary: Flat Out with North America’s Greatest Race Series (2016), which earned a Gold Medal in the 2017 International Automotive Media Competition, and F1 Mavericks: The Men and Machines that Revolutionized Formula 1 Racing (2019). He lives in Ormond Beach, Florida.