JUE 477: The remarkable history and restoration of the world's first production Land-Rover (Hardcover) 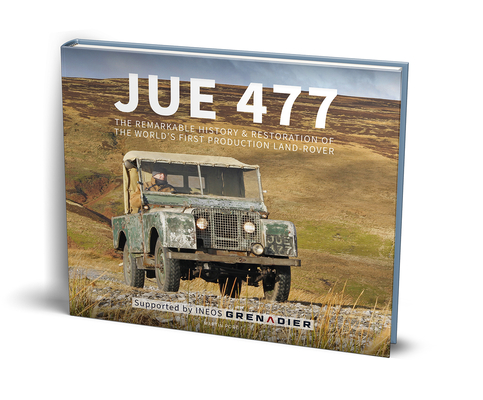 By Martin Port
Email or call for price.
Special Order

Revealed to the world in 1948, the Land-Rover not only revived the Rover Company's fortunes in an austerity-riddled post-war period, but galvanized its future, thanks to the model's almost immediate success.

With the manufacture of an initial 48 ‘pre-production’ examples coming to a close, the first official production models were assembled – starting with chassis 860001. As original factory records prove, this pivotal vehicle was destined for His Royal Highness King George VI, but the decision was made to postpone the presentation and instead, ‘number one’ was retained by the factory until 1950, when it was registered JUE 477 before leaving Rover Company ownership.

After decades left out in the cold and exposed to the elements, 860001 had certainly seen better days, but thanks to the determination of Sir Jim Ratcliffe, founder and Chairman of INEOS, the future of JUE 477 was secured in 2017. Over the next two years, a dedicated team of experts, led by chief restorer, Julian Shoolheifer set about restoring the vehicle while retaining as much of its original DNA as was physically, and safely, possible and making sure that this remarkable vehicle’s history and past life was still worn with pride.

Martin Port has worked in automotive publishing for 18 years – the last 16 of these for leading classic car title, Classic & Sports Car. Over the last 27 years, he has owned a variety of classics, from a Mini Metro to a Morris Minor, a Porsche 912 to a Series II Land-Rover, and, of course, the legendary Mini. The first of these was a 1968 Morris Mini MkII Super DeLuxe, driven from Cheshire to Berkshire with a hole in one of the valves. The second was a 1980-model rescued from a hedge in Richmond the day that it was due to be scrapped. Thanks to the Mini’s unique driving experience, which always puts a smile on his face, it will always have a corner of his motoring heart.