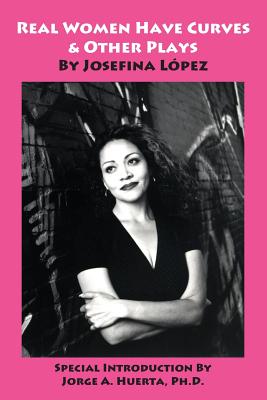 By Josefina Lopez, Jorge a. Huerta (Introduction by)
$19.88
Not Currently On The Shelf, But We Can Ship It To You In 3-5 Days

Five well known plays by well known playwright and screenwriter Josefina Lopez presented with a detailed introduction from Dr. Jorge A. Huerta. Real Women Have Curves explores the politics of beauty and the power women have when working together. Simply Maria or the American Dream deals with the struggle of a young Mexican girl to find her identity and stay true to her self and her dreams. Confessions of Women from East L.A. shatters stereotypes of Latina women by providing complex explorations into to the Latina experience. Food for the Dead is a satirical look at machismo while celebrating Mexican cultural traditions and sexual liberation. Unconquered Spirits explores the legend of "La Llorona" from a Chicana feminist perspective retelling the spiritual conquest of Mexico and celebrating the unbeatable spirit of the indigenous and Chicanos. Josefina L pez is best known for authoring the play and co-authoring the film Real Women Have Curves, a coming-of-age story about Ana, a first-generation Chicana torn between pursuing her college ambitions, a personal goal, and securing employment which is a family expectation. Along the way, Ana confronts a host of cultural assumptions about beauty, marriage and a woman's role in society. Although Real Women Have Curves is Lopez' most recognized work, it is only one of many literary and artistic works she has created since her artistic career began at 17. Born in San Luis Potosi, Mexico in 1969, Josefina Lopez was five years old when she and her family immigrated to the United States and settled in the East Los Angeles neighborhood of Boyle Heights. Josefina was undocumented for thirteen years before she received Amnesty in 1987 and eventually became a U.S. Citizen in 1995. Josefina has been an activist and has been doing public speaking for over 20 years and has lectured on various topics including Chicano Theater, Women's History Issues, Minority representation in Cinema at over 200 universities such as Yale, Darmouth, and USC. She also has a magazine column called "Ask A Wise Latina". She has been the subject of countless TV & Radio interviews in which she has passionately discussed immigration issues and other controversial subjects concerning women and minorities. Josefina is the recipient of a number of other awards and accolades, including a formal recognition from U.S. Senator Barbara Boxer's 7th Annual "Women Making History" banquet in 1998; and a screenwriting fellowship from the California Arts Council in 2001. She and Real Women Have Curves co-author George LaVoo won the Humanitas Prize for Screenwriting in 2002, The Gabriel Garcia Marquez Award from L.A. Mayor in 2003, and the Artist-in-Residency grant from the NEA/TCG for 2007. Josefina is presently developing the musical version of Real Women Have Curves. Her first novel titled Hungry Woman in Paris came out last spring. She wrote a play to protest SB1070 titled Detained in the Desert, which she is currently making into a film. She is working on her next novel Summer of San Miguel and opening a cultural center in Boyle Heights where she plans to continue celebrating women and Latinos For more information please go to josefinalopez.com & casa0101.org.