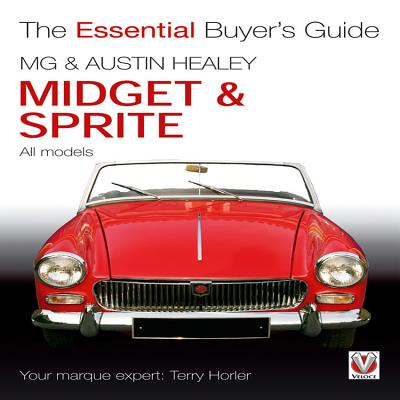 This book is the perfect companion for the first-time or even more experienced buyer. All the information is here to help make a clear and balanced decision, to counter the vendor’s claims, and even negotiate a better price. The author has bought and sold many MG Midgets & A-H Sprites over the years, and his knowledge and enthusiasm will prove a vital resource for potential buyers.

Trained as a Tool Maker in the aerospace industry, Terry Horier has a keen interest in all things of an engineering nature. His first Austin-Healey Sprite, a 1959 Mk1 was bought from a work colleague in 1969. After considerable repair work, it was sold just nine months later, an action that was soon regretted. The next Sprite came along in 1976 followed by several other Sprites and Midgets. Terry still owns and drives a 1960 Sprite purchased in 1979 and a 1968 Sprite Mk1V purchased in 1984. This obvious interest in the marque led Terry, along with another work colleague, to form the Midget and Sprite Club in 1983 when these cars were at their lowest ebb. Since then, Terry has been a technical consultant for the club, writing many articles for the club magazine, forming the Sprite and Midget register and helping owners with a wide variety of problems. Terry?s first book, Original Sprite and Midget was published in 1994 and has been regarded as the definitive work on these cars. Terry is

"Few are better placed to write an Essential Buyer's Guide to the MG Midget and Healey Sprite than long-term owner and Midget and Sprite Club founder Terry Horler. He gives the perfect introduction, covering all of the tips and the pitfalls to buying these stylish and sporty BMC compacts." – Classic & Sports Car