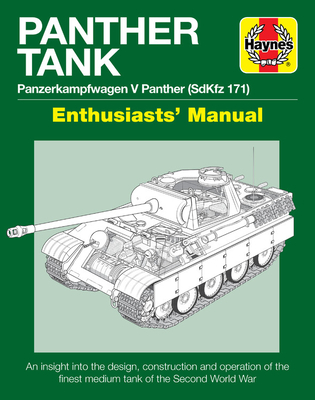 Regarded by many as one of the greatest tanks ever built, the German Panther is probably the finest medium tank of the Second World War and certainly the most numerous German panzer in wartime service, with some 7,000 built. It combined firepower, armour protection and mobility that was unmatched by any other tank of the period.  In the Panther Tank Enthusiasts' Manual, author Mark Healy looks at the development, construction and fighting qualities of the Panther, as well as including insights into what it was like to operate and maintain. He focuses on surviving Panthers at the German Armour Museum in Munster (Panther Ausf A) and the later Panther Ausf G at the Tank Museum, Bovington, as his centrepieces and draws on a range of documentary and photographic information sources in Germany, the USA and France.

Mark Healy is the author of the Haynes T-34 Tank Manual as well as Panther Tank Manual. Midway 1942, The Tiger Tank Story and Zitadelle: The German Offensive against the Kursk Salient 14–17 July 1943. He also produced the best-selling video series Die Deutschen Panzer. He lives in Dorset.