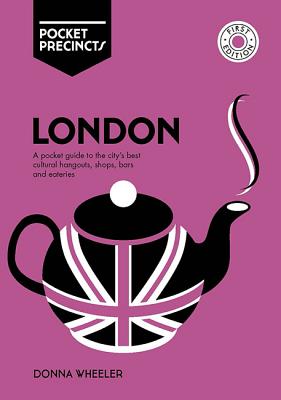 By Penny Watson
Email or call for price.
Special Order

London is one of the world's grandest cities, rivalling Paris and Rome for iconic buildings and stately architecture, and New York for world-class creativity, ideas and culture. It's a city where the Royal family is still idealised and romanticised to fairytale proportions; where countless movies and TV serials are filmed; and where celebrities—from movie stars and singers to authors and chefs—flock to live. It's a multicultural melting pot with residents from around the globe speaking more than 300 languages, but it also retains those very loveable English traditions where tea-drinking clichés and Hugh Grant stereotypes still bring a smile. London Pocket Precincts is your curated guide to the city's best cultural, shopping, eating and drinking experiences. Slip this guide into your pocket and head off on an adventure, experiencing the hippest places in London and surrounds like a local.

Award-winning writer, journalist and author Penny Watson has lived in London twice over the past two decades. Penny has traveled the world, written feature articles for countless magazines, newspapers and blogs, and researched a number of guidebooks including Hong Kong Precincts. She is a member of both the British Guild of Travel Writers, and Australian Society of Travel Writers.