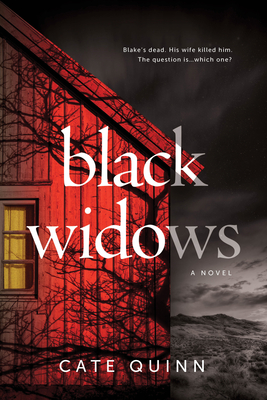 Fast-paced and easy to get into.  Blake is a non-conformist LDS with three wives.  Blake is dead – evidence points to the murderer being one of them - which one killed him?  They all have motives, and murky backstories. The differing backgrounds of the women made for interesting reading.  The dynamics between the sister-wives is well done and added much to the story.  Good if you liked The Wife Between Us.

"While Quinn writes with spirit on weighty subjects like domestic abuse, polygamy and religious cults, her primary and most poignant theme seems to be female friendship." --New York Times Book Review

"An absolutely thrilling novel. I devoured it over a weekend, unable to put it down. It's a clever and completely original take on a domestic thriller." --Alex Michaelides, author of the #1 New York Times bestseller The Silent Patient

Blake's dead. They say his wife killed him. If so... which one?

Polygamist Blake Nelson built a homestead on a hidden stretch of land--a raw paradise in the wilds of Utah--where he lived with his three wives:

Rachel, the first wife, obedient and doting to a fault, with a past she'd prefer to keep quiet.
Tina, the rebel wife, everything Rachel isn't, straight from rehab and the Vegas strip.
And Emily, the young wife, na ve and scared, estranged from her Catholic family.

The only thing that they had in common was Blake. Until all three are accused of his murder.

When Blake is found dead under the desert sun, all three wives become suspect--not only to the police, but to each other. As the investigation draws them closer, each wife must decide who can be trusted. With stories surfacing of a notorious cult tucked away in the hills, whispers flying about a fourth wife, and evidence that can't quite explain what had been keeping Blake busy, the three widows face a reckoning that might shatter all they know to be true.

For fans of The Wife Between Us and The Dry comes a chilling murder mystery that takes a domestic thriller's classic question--"Did his wife kill him?"--and twists it into an completely new type of suspense.