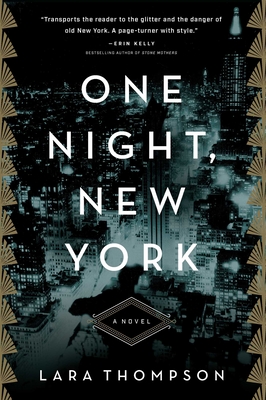 Set over the course of a single evening, this literary thriller is at once a detective story, a romance, and a coming-of-age tale. It is also a story of old New York, of Greenwich Village between the wars, of artists and bohemians lighting up Manhattan as the Great Depression descends upon the city.

For the hundredth time since they'd made their promise, she wondered if she and Agnes were really going to go through with it, if she was brave and terrible enough . . .

A thrilling debut novel of corruption and murder set in the nightclubs, tenements, and skyscrapers of 1930s New York.

At the top of the Empire State Building on a freezing December night, two women hold their breath. Frances and Agnes are waiting for the man who has wronged them. They plan to seek the ultimate revenge.

Set over the course of a single night, One Night, New York is a detective story, a romance and a coming-of-age tale. It is also a story of old New York, of bohemian Greenwich Village between the wars, of floozies and artists and addicts—lighting up the world, while all around them America burned with the Great Depression.

Lara Thompson succeeding in besting hundred of competing applicants to win the inaugural Virago/The Pool New Crime Writer Award competition with the manuscript of her first novel, One Night, New York. Lara is a lecturer in film at Middlesex University and she drew on her love of film noir, the photography of Berenice Abbot, and her own family history for this novel's backdrop. She lives in London.

"Set in Depression-era New York, Thompson’s story portrays both the glitter and glamour of the Big Apple and its darker, seamier side. Noirish, evocative, and original, with charismatic and colorful characters, bizarre twists, and an unexpected ending, this is a promising debut from a talented new author."
— Booklist

"Lara Thompson’s glittering Art-Deco, Depression-era crime novel takes place over the course of a single December night in the 1930s, when two women meet atop the Empire State Building to punish the man who wronged them. If you love New York City like I do, you’re going to want to read it."
— Lit Hub, Most Anticipated Books of 2021

"From its breathless opening pages, One Night, New York transports the reader to the glitter and the danger of old New York. A page-turner with style.”
— Erin Kelly, author of He Said/She Said and The Poison Tree

“An assured debut so evocative you can almost smell the bathtub gin wafting off the pages.”
— Red Magazine

"Lara Thompson's portrayal of stubborn, brave Frances is enthralling; this page-turning thriller marks her as a writer to watch."
— Antonia Senior, The Times (London)

"When the final credits go up on this dark debut, it's like surfacing into daylight after a session in an old-fashioned cinema. With its film noir edginess, this story of 1930s speakeasy New York begins with a dizzying scene atop the Empire State Building—two women, lovers, about to push a man who embodies the corruption of the times to his death.”
— Sainsbury's Magazine

"Set in 1932, the novel begins on 21 December, with Frances and her lover Agnes at the top of the newly erected Empire State Building, preparing a terrible revenge on a man who has wronged them both.  From the destitute war veterans who inhabit the shanty towns to the ritzy nightclubs selling illegal booze, this is an atmospheric portrait of a city in the grip of the Great Depression as well as a compelling crime story.”
— The Guardian