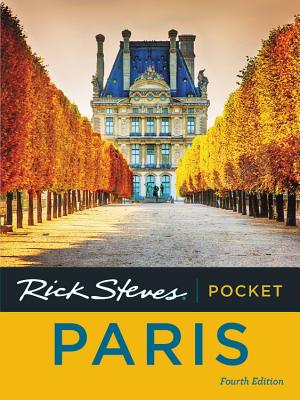 By Rick Steves, Steve Smith, Gene Openshaw
$13.99
Not Currently On The Shelf, But We Can Ship It To You In 3-5 Days

Make the most of every day and every dollar with Rick Steves! This colorful, compact guidebook is perfect for spending a week or less in Paris:
Lightweight yet packed with valuable insight into Paris's history and culture, Rick Steves Pocket Paris truly is a tour guide in your pocket.
Expanding your trip? Try Rick Steves France!

Since 1973, Rick Steves has spent about four months a year exploring Europe. His mission: to empower Americans to have European trips that are fun, affordable, and culturally broadening. Rick produces a best-selling guidebook series, a public television series, and a public radio show, and organizes small-group tours that take over 30,000 travelers to Europe annually. He does all of this with the help of more than 100 well-traveled staff members at Rick Steves' Europe in Edmonds, WA (near Seattle). When not on the road, Rick is active in his church and with advocacy groups focused on economic and social justice, drug policy reform, and ending hunger. To recharge, Rick plays piano, relaxes at his family cabin in the Cascade Mountains, and spends time with his son Andy and daughter Jackie. Find out more about Rick at www.ricksteves.com and on Facebook.
Connect with Rick:
facebook.com/RickSteves
twitter: @RickSteves
instagram: ricksteveseurope
Steve Smith manages tour guides for Rick Steves' Europe tour program and has been researching guidebooks with Rick for over two decades. Fluent in French, he's lived in France on several occasions, starting when he was seven. Steve owns a restored farmhouse in rural Burgundy where he hangs his beret in research season. Steve's wife Karen Lewis Smith, who is an expert on French cuisine and wine, provides invaluable contributions to his books.
Gene Openshaw has co-authored a dozen Rick Steves books, specializing in writing walks and tours of Europe's cities, museums, and cultural sites. He also contributes to Rick's public television series, produces tours for Rick Steves Audio Europe, and is a regular guest on Rick's public radio show. Outside of the travel world, Gene has co-authored The Seattle Joke Book. As a composer, Gene has written a full-length opera called Matter, a violin sonata, and dozens of songs. He lives near Seattle with his daughter, enjoys giving presentations on art and history, and roots for the Mariners in good times and bad.