Along Came a Spider (CD-Audio) 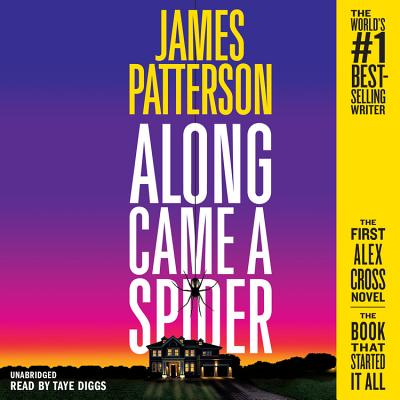 By James Patterson, Charles Turner (Read by)
Email or call for price.
Out of Print

Discover the classic thriller that launched the #1 detective series of the past twenty-five years, now one of PBS's "100 Great American Reads"

Alex Cross is a homicide detective with a Ph.D. in psychology. He works and lives in the ghettos of D. C. and looks like Muhammad Ali in his prime. He's a tough guy from a tough part of town who wears Harris Tweed jackets and likes to relax by banging out Gershwin tunes on his baby grand piano. But he also has two adorable kids of his own, and they are his own special vulnerabilities.

Jezzie Flanagan is the first woman ever to hold the highly sensitive job as supervisor of the Secret Service in Washington. Blond, mysterious, seductive, she's got an outer shell that's as tough as it is beautiful. She rides her black BMW motorcycle at speeds of no less than 100 mph. What is she running from? What is her secret?

Alex Cross and Jezzie Flanagan are about to have a forbidden love affair-at the worst possible time for both of them. Because Gary Soneji, who wants to commit the "crime of the century," is playing at the top of his game. Soneji has outsmarted the FBI, the Secret Service, and the police. Who will be his next victim?

Gary Soneji is every parent's worst nightmare. He has become Alex Cross's nightmare. And now, reader, he's about to become yours.

"Patterson's storytelling talent is in top form in this grisly escapist yarn."—Library Journal

"Brilliantly terrifying! So exciting that I had to stay up all night to finish it! Packed with white-knuckle twists."—Daily Mail

"An incredibly suspenseful read with a one-of-a-kind villain who is as terrifying as he is intriguing. One of the best thrillers of the year."—Clive Cussler

"Terror and suspense that grab the reader and won't let go. Just try running away from this one."—Ed McBain