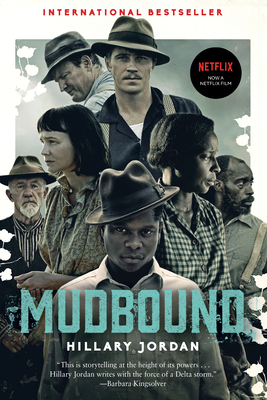 Now a major motion picture from Netflix, directed by Dee Rees, nominated in four categories for the Academy Awards.

In Jordan's prize-winning debut, prejudice takes many forms, both subtle and brutal. It is 1946, and city-bred Laura McAllan is trying to raise her children on her husband's Mississippi Delta farm—a place she finds foreign and frightening. In the midst of the family's struggles, two young men return from the war to work the land. Jamie McAllan, Laura's brother-in-law, is everything her husband is not—charming, handsome, and haunted by his memories of combat. Ronsel Jackson, eldest son of the black sharecroppers who live on the McAllan farm, has come home with the shine of a war hero. But no matter his bravery in defense of his country, he is still considered less than a man in the Jim Crow South. It is the unlikely friendship of these brothers-in-arms that drives this powerful novel to its inexorable conclusion.

The men and women of each family relate their versions of events and we are drawn into their lives as they become players in a tragedy on the grandest scale. As Kingsolver says of Hillary Jordan, "Her characters walked straight out of 1940s Mississippi and into the part of my brain where sympathy and anger and love reside, leaving my heart racing. They are with me still."

Hillary Jordan is the author of the novels Mudbound (2008) and When She Woke (2011), as well as the digital short “Aftermirth.”

Mudbound won the 2006 Bellwether Prize, founded by Barbara Kingsolver to recognize socially conscious fiction, and a 2009 Alex Award from the American Library Association. It was the 2008 NAIBA Fiction Book of the Year and was long-listed for the 2010 International IMPAC Dublin Literary Award. Paste magazine named it one of the Top Ten Debut Novels of the Decade. Mudbound has been translated into French, Italian, Serbian, Swedish, and Norwegian, and the film version is forthcoming in fall 2017.

When She Woke was long-listed for the 2013 International IMPAC Dublin Literary Award and was a 2012 Lambda Literary Award finalist. It has been translated into French, German, Spanish, Turkish, Brazilian Portuguese, and Chinese complex characters.

Jordan has a BA from Wellesley College and an MFA in Creative Writing from Columbia University. She grew up in Dallas, Texas, and Muskogee, Oklahoma, and currently lives in Brooklyn, New York.

"A supremely readable debut novel . . . Mudbound is packed with drama. Pick it up, then pass it on."
—People

"A compelling family tragedy, a confluence of romantic attraction and racial hatred that eventually falls like an avalanche . . . An engaging story."
—The WashingtonPost

"The forces of change and resistance collide with terrible consequences."
—The New York Times

"Stunning. . . . You are truly taken there by Jordan's powerful, evocative writing and complex characters."
—The BostonGlobe

"By the end of the very short first chapter, I was completely hooked . . . This inside understanding of conflicting emotions and motivations leads to a complicated stew in which the distinction between good and evil isn't always clear. This is a book in which love and rage cohabit. This is a book that made me cry."
—MinneapolisStar-Tribune

"Mudbound dramatizes the human cost of unthinking hatred . . . That Hillary Jordan makes a hopeful ending seem possible, after the violence and injustice that precedes it, is a tribute to the novel's voices and the contribution each makes to the story . . . [They] live in the novel as individuals, black and white, which gives Mudbound its impact."
—AtlantaJournal Constitution

"Mudbound is as much a tale of racism as it is the transcending powers of love and friendship."
—AustinAmerican Statesman

"An absorbing debut novel . . . Is it too early to say, after just one book, that here's a voice that will echo for years to come?"
—San Antonio Express News

"Mudbound argues for humanity and equality, while highlighting the effects of war. For a historical novel, it has a most contemporary theme . . . [The] mixture of the predictable and the unpredictable will keep readers turning the pages. . . . It feels like a classic tragedy, whirling toward a climax . . . [An] ambitious first novel."
—Dallas Morning News

"Mudbound, which is the 2006 winner of Barbara Kingsolver's Bellwether Award, founded to recognize literature of social responsibility, does an excellent job of capturing the impacts of racism both casual and deliberate."
—DenverPost

"A superbly rendered depiction of the fury and terror wrought by racism."
—Publishers Weekly

"[A] poignant and moving debut novel. . . . Jordan faultlessly portrays the values of the 1940s as she builds to a stunning conclusion. Highly recommended."
—Library Journal, starred review

"This is storytelling at the height of its powers: the ache of wrongs not yet made right, the fierce attendance of history made as real as rain, as true as this minute. Hillary Jordan writes with the force of a Delta storm. Her characters walked straight out of 1940's Mississippi and into the part of my brain where sympathy and anger and love reside, leaving my heart racing. They are with me still."
—Barbara Kingsolver

“A real page turner—a tangle of history, tragedy and romance powered by guilt, moral indignation and a near chorus of unstoppable voices. Any reader will appreciate the overlap of forbidden loves and deadly secrets.”
—Stewart O'Nan