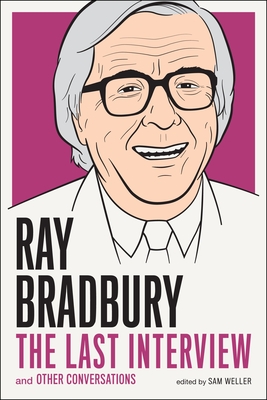 Ray Bradbury was long the most influential sci-fi writer in the world, the poetic and visionary author of such classics as Fahrenheit 451, The Martian Chronicles, and The Illustrated Man

But he also lived a fascinating life outside the parameters of sci-fi, and was a masterful raconteur of his own story, as he reveals in his wide-ranging and in-depth final interview with his acclaimed biographer, Sam Weller. After moving to Los Angeles, he became an inveterate fanboy of movie stars, spending hours waiting at studio gates to get autographs. He would later get to know many of Hollywood’s most powerful figures when he became a major screenwriter, and he details here what it was like to work for legendary directors such as John Huston and Alfred Hitchcock. And then there are all the celebrities—from heads of state like Mikhail Gorbachev to rock stars like David Bowie and the members of Kiss—who went out of their way to arrange encounters with Bradbury.

But throughout that last talk, as well as the interviews collected here from earlier in his career, Bradbury constantly twists the elements of his life into a discussion of the influences and creative processes behind his remarkable developments and inventions for the literary form he mastered. Mixed with cheerful gossiping about his travels and the characters of his life, it makes for a rich reading experience and a revealing collection of interviews.

RAY BRADBURY (1920–2012) was for decades the world’s most preeminent author of science fiction and fantasy, acclaimed for such renowned titles as Fahrenheit 451 and The Martian Chronicles. He began writing quite young, selling jokes to radio comedian George Burns when he was 14, and publishing his first short story—to Imagination magazine—when he was 18. He would go on to write not only seminal sci-fi, but numerous other kinds of books, as well as numerous television and movie screenplays, such as for TV’s Twilight Zone and John Huston’s Moby Dick. When he died in 2012, President Obama said, “His gift for storytelling reshaped our culture and expanded our world.”

Editor SAM WELLER is the author of The Bradbury Chronicles: The Life of Ray Bradbury, and has lectured across the United States on the life and work of Bradbury. Weller is a professor in the Fiction Writing Department at Columbia College Chicago.

“The Bradbury edition benefits from the author’s warm rapport with his biographer, Sam Weller... In their discussions [Bradbury] remains full of passion."
—New Yorker, Books to Watch Out For

“He was my muse for the better part of my sci-fi career . . . In the world of science fiction and fantasy and imagination he is immortal.”
—Steven Spielberg

“Mr. Bradbury was the writer most responsible for bringing modern science fiction into the literary mainstream.”
—The New York Times

“One of this country’s most beloved writers . . . A great storyteller, sometimes even a mythmaker, a true American classic.”
—The Washington Post

“The uncrowned poet laureate of science fiction.”
—The Times

“Ray Bradbury has a powerful and mysterious imagination which would undoubtedly earn the respect of Edgar Allen Poe.”
—The Guardian