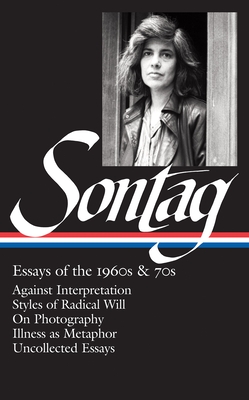 This is book number 1 in the Library of America Susan Sontag Edition series.

With the publication of her first book of criticism, Against Interpretation, in 1966, Susan Sontag placed herself at the forefront of an era of cultural and political transformation. “What is important now,” she wrote, “is to recover our senses . . . . In place of a hermeneutics we need an erotics of art.” She would remain a catalyzing presence, whether writing about camp sensibility, the films of Jean-Luc Godard and Alain Resnais, her experiences as a traveler to Hanoi at the height of the Vietnam War, the aesthetics of science-fiction and pornography, or a range of modern thinkers from Simone Weil to E. M. Cioran. She opened dazzling new perspectives on any subject she addressed, whether the nature of photography or cultural attitudes toward illness. This volume, edited by Sontag’s son David Rieff, presents the full texts of four essential books: Against Interpretation, Styles of Radical Will (1969), On Photography (1977), and Illness as Metaphor (1978). Also here as a special feature are six previously uncollected essays including studies of William S. Burroughs and the painter Francis Bacon and a series of reflections on beauty, aging, and the emerging feminist movement.

LIBRARY OF AMERICA is an independent nonprofit cultural organization founded in 1979 to preserve our nation’s literary heritage by publishing, and keeping permanently in print, America’s best and most significant writing. The Library of America series includes more than 300 volumes to date, authoritative editions that average 1,000 pages in length, feature cloth covers, sewn bindings, and ribbon markers, and are printed on premium acid-free paper that will last for centuries.

David Rieff is the author of Swimming in a Sea of Death: A Son’s Memoir and the editor of the journals and notebook of Susan Sontag, of which two volumes have appeared to date. His many other books include At the Point of a Gun: Democratic Dreams and Armed Intervention and A Bed for the Night: Humanitarianism in Crisis. He lives in New York.