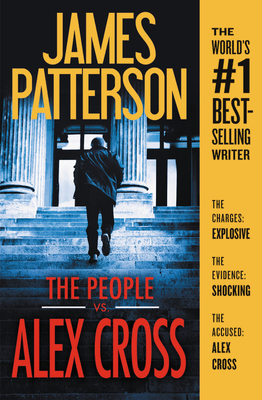 This is book number 23 in the An Alex Cross Thriller series.

With explosive charges and shocking evidence, Alex Cross is about to face the trial of the century in the #1 New York Times bestselling series.
Alex Cross is on the wrong side of the law. Charged with gunning down followers of his nemesis Gary Soneji in cold blood, he is being turned into the poster child for trigger-happy cops. Cross knows it was self-defense. But will a jury see it that way?
When his former partner Sampson shows up needing his help, Cross jumps at the chance, even if it may end up costing him what's left of his career. When a string of young, blonde women go missing, the investigation leads Cross and Sampson to the most depraved, darkest corners of the internet, where murder is just another form of entertainment.
As the prosecution presents its case, and the nation watches, even those closest to Cross begin to doubt his innocence. If he can't convince his own family that he didn't pull the trigger with intent to kill, how can he hope to persuade a jury? But even with everything on the line, Cross will do whatever it takes to stop a dangerous criminal . . . even if he can't save himself.
Struggling to prove his own innocence and uncover the truth lurking online, Cross must risk everything to save his most at-risk patient of all: himself.

James Patterson holds the Guinness World Record for the most #1 New York Times bestsellers. His books have sold more than 350 million copies worldwide. He has donated more than one million books to students and soldiers and has over four hundred Teacher Education Scholarships at twenty-four colleges and universities. He has also donated millions to independent bookstores and school libraries.

"Behind all the noise and the numbers, we shouldn't forget that no one gets this big without amazing natural storytelling talent--which is what James Patterson has, in spades. The Alex Cross series proves it."
—Lee Child

"It's no mystery why James Patterson is the world's most popular thriller writer: his uncanny skill in creating living, breathing characters we truly feel for and seamless, lightning-fast plots. I do this for a living, and he still manages to keep me guessing from the first to last page. Simply put: Nobody does it better."
—Jeffrey Deaver