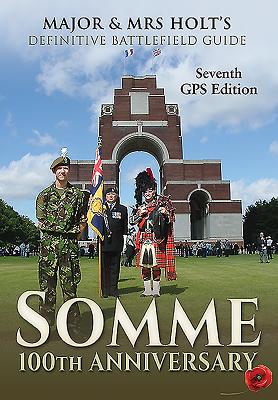 The 100th Anniversary of the most publicly aware battle of WW1 - the battle of the Somme, will be on 1 July 2016 and every media form will be covering it from January onwards. The book has taken 20 years to mature from its first edition to this new 'Definitive' edition, the Seventh, each time being updated and expanded. It is a legacy that should be on every bookshelf. The book is based upon over 30 years of traveling and writing about battlefields by two people - Major and Mrs Holt - who are credited with having started the modern era of battlefield tours - and were awarded the Somme Centenary Medal for their work in 'opening the doors to the battlefields' with their books. This Guide Book is MORE than a guide book - Sir Martin Gilbert said, ' the Holts have raised the Guide Book to a new high level, ' and ' the golden thread that runs through it (the previous Somme Guide) - is the focus that the Holts give to the stories of individuals'. It will therefore appeal both to General and to Specialist readers whether they travel to the battlefields or not. This is not merely a guide book, nor a history book, but it is brimming with human interest stories of veterans' experiences, tales of bravery, comradeship, natural terror, literary illusions to poets who experienced the battles (such a Owen & Sassoon, Seeger and Sorley) ... If you buy just one book about the Battle of the Somme, this is the one that you should have, written by those who know the area and the battlefield better even than the French themselves, and who tell its story from both humanistic and military standpoints.