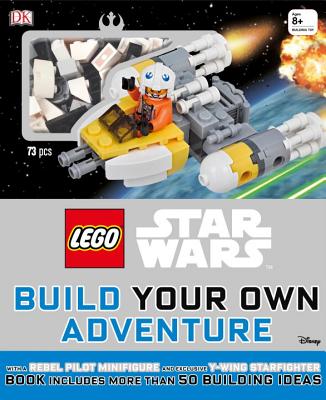 Featuring brick and instructions to build an exclusive LEGO® Star Wars™ Y-wing model, this book combines more than 50 inspirational ideas for building with enthralling story starters from the world of LEGO Star Wars.

LEGO Star Wars: Build Your Own Adventure will inspire kids to build and play out adventures of their own in this build and book set.

Organized into five chapters based on different planets in the Star Wars universe, readers will use their builds to break prisoners out in Cloud City and spy on the Imperial Army on Endor. Model ideas will inspire readers of various ages and abilities, with an appropriate mix of easy, medium, and harder builds.

LEGO Build Your Own Adventure is an interactive story and build series that comes with bricks and building instructions that allow the reader to build an exclusive LEGO model. Each book in the series allows fans to unlock their creativity and imagination to create their own adventures with their favorite characters from a popular LEGO theme.

DK was founded in London in 1974 and is now the world's leading illustrated reference publisher and part of Penguin Random House, formed on July 1, 2013. DK publishes highly visual, photographic nonfiction for adults and children. DK produces content for consumers in over 87 countries and in 62 languages, with offices in Delhi, London, Melbourne, Munich, New York, and Toronto. DK's aim is to inform, enrich, and entertain readers of all ages, and everything DK publishes, whether print or digital, embodies the unique DK design approach. DK brings unrivalled clarity to a wide range of topics with a unique combination of words and pictures, put together to spectacular effect. We have a reputation for innovation in design for both print and digital products.   Our adult range spans travel, including the award-winning DK Eyewitness Travel Guides, history, science, nature, sport, gardening, cookery, and parenting. DK’s extensive children’s list showcases a fantastic store of information for children, toddlers, and babies. DK covers everything from animals and the human body, to homework help and craft activities, together with an impressive list of licensing titles, including the bestselling LEGO® books. DK acts as the parent company for Alpha Books, publisher of the Idiot's Guides series and Prima Games, video gaming publishers, as well as the award-winning travel publisher, Rough Guides.

Daniel Lipkowitz is a senior writer and story developer at the LEGO Group. His writing has appeared in LEGO Club Magazine as well as LEGO Master Builder Academy, and his characters and storylines regularly appear in new LEGO themes and animated LEGO films. He is the author of The LEGO Ideas Book, LEGO Awesome ideas, and Lego Play Book: Ideas to Bring Your Bricks to Life.