Shadows in the Vineyard: The True Story of the Plot to Poison the World's Greatest Wine (Hardcover) 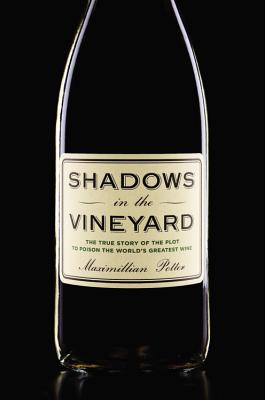 Journalist Maximillian Potter uncovers a fascinating plot to destroy the vines of La Romance-Conti, Burgundy's finest and most expensive wine.

In January 2010, Aubert de Villaine, the famed proprietor of the Domaine de la Romance-Conti, the tiny, storied vineyard that produces the most expensive, exquisite wines in the world, received an anonymous note threatening the destruction of his priceless vines by poison-a crime that in the world of high-end wine is akin to murder-unless he paid a one million euro ransom. Villaine believed it to be a sick joke, but that proved a fatal miscalculation and the crime shocked this fabled region of France. The sinister story that Vanity Fair journalist Maximillian Potter uncovered would lead to a sting operation by some of France's top detectives, the primary suspect's suicide, and a dramatic investigation. This botanical crime threatened to destroy the fiercely traditional culture surrounding the world's greatest wine.

Shadows in the Vineyard takes us deep into a captivating world full of fascinating characters, small-town French politics, an unforgettable narrative, and a local culture defined by the twinned veins of excess and vitality and the deep reverent attention to the land that runs through it.

Maximillian Potter is Esquire magazine's Editor-at-Large. Formerly the executive editor of 5280: Denver's Magazine, he has been a staff writer at Premiere, Philadelphia, and GQ, and a contributor to Vanity Fair. He was a senior advisor to Colorado Governor John Hickenlooper, with whom he co-authored the governor's memoir. Potter is native of Philadelphia with a BA from Allegheny College and MSJ from Northwestern University's Medill School.

"A rare book that transcends the narrow interests of wine lovers."—The New York Times, named a Best Wine Book of 2014

"In the end, the book turns out to be less about a dastardly crime than about the powerful mysticism surrounding Burgundy's wine culture....Powerful."—The New York Times Book Review

"SHADOWS IN THE VINEYARD details the tale of a threat so bizarre it seems unreal: one deluded man's attempt at a big score by threatening a true culinary treasure...the prose is evocative...and captures the gravitas of a crime with deep cultural resonance without becoming wonky."—San Francisco Gate

"A gripping crime drama more creative than most procedurals, and Potter does excellent working in fleshing out both the involved players and the historical context of the Burgundy region and its oenophiles."—The Daily Beast

"[Potter] places the crime in a broad, rich, historical and cultural context that is engaging"—USA Today

"Inspired by a daring crime that a lesser writer might reduce to police procedural, Maximillian Potter has opened a portal into a fabled world unknown to outsiders. The story he so compellingly recounts in SHADOWS IN THE VINEYARD breathes, like the hallowed wine at its heart, with life and history and wonder."—Benjamin Wallace, author of The Billionaire's Vinegar

"Aubert de Villaine is the legend behind the legend. DRC is the most celebrated wine on the planet and the place where the alchemy of the soul of the earth, combined with the elements, as well as the knowledge and wisdom of craftsmen, are united to create this magical nectar. But out of nowhere, the dark side interfered and this inconceivable thriller began. This riveting story, where good ultimately triumphs, instills a renewed appreciation of the Côte d'Or region, its people, and the passion that is the fortitude behind this incredible wine."—Eric Ripert, chef and co-owner, Le Bernardin, author of Avec Eric

"A gripping, real-life mystery and an intimate portrait of one of the world's great wine-makers as he battles the man bent on destroying five centuries of greatness. Maximillian Potter has always been an outstanding reporter and now he reveals the fascinating story of France's legendary vineyard, Domaine Romain Conti."—Michael Hainey, author of After Visiting Friends

"An arch-criminal clicks on his headlamp in his underground lair and instantly, you're hooked. SHADOWS IN THE VINEYARD is non-fiction at its nail-biting best, a literary true-crime thriller that plunges you into the manhunt to apprehend - and understand - a mysterious villain who set out to destroy the most treasured wines in the world. SHADOWS IN THE VINEYARD is so full of bizarre twists and one-of-a-kind characters that if you think you know what's coming next, just wait till you turn the page."—Christopher McDougall, author of Born to Run

"Maximillian Potter has taken a sinister plot and woven an intriguing story around the most revered wine estate in the world with the most respected winemaker at its helm. Through this event he has painted a colorful tableau filled with fascinating historical evidence on why the Domaine de la Romanée-Conti, the terroir of Burgundy, and the culture of Burgundy, are among the most treasured and special sites on the planet. Bravo."—Daniel Boulud, James Beard Award-winning chef, and Daniel Johnnes, James Beard Award-winning sommelier

"A whodunit with a culprit worthy of a Woody Allen film, Potter's first book is a rich study of a cinematic crime and bona fide page-turner....Even the most devout teetotaler will have a hard time putting this one down."—Publishers Weekly (STARRED)

"A satisfying crime story expanded into a love letter to a great French vineyard."—The Dispatch

"Remarkable...Through his immersive reporting, Potter gives us a privileged look at today's Burgundy."—Terroirist