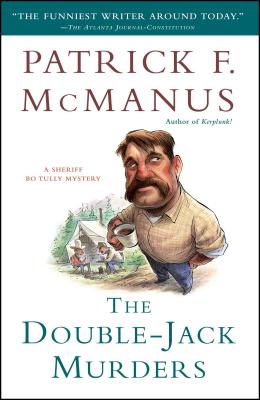 Sheriff Bo Tully is the kind of western lawman who's as good with the ladies as he is with his guns, and he never lets a death threat get in the way of a good barbecue. He's a man with a sense of humor, which comes in handy when trying to establish order in Blight County.

In this latest tale, Tully pursues a seventy-five-year-old missing persons case in which a pair of gold miners (a two-man drilling team known as a double-jack) mysteriously disappeared just as they hit the mother lode in a remote part of Blight County. Meanwhile, a second, more threatening case looms large. After serving only two months of a life sentence, a mentally unstable murderer named Kincaid—a nasty piece of work if there ever was one—manages to escape prison, setting his sights on killing the man who put him behind bars: one Sheriff Bo Tully. In an effort to lead his would-be killer into the open, and also to do a little gold prospecting and fishing while he's at it, Tully heads north with his ex-sheriff father, Pap, and his friend and expert tracker, Dave.
As the two cases play themselves out, Sheriff Tully finds himself hunting down one murderer who's probably long dead, and being hunted by another who's very much alive. A fast-moving tale of murder, mayhem, and mining, The Double-Jack Murders is Patrick F. McManus's darkest, most entertaining mystery yet.

Patrick F. McManus is a renowned outdoor writer, humorist, and longtime columnist for Outdoor Life and Field & Stream. His most recent Sheriff Bo Tully mysteries are The Double-Jack Murders and Avalanche. He is the author of many other books, including such runaway New York Times bestsellers as The Grasshopper Trap, The Night the Bear Ate Goombaw, and Real Ponies Don't Go Oink! He lives in Spokane, Washington.

“The laid-back Bo and McManus’ signature humor are the main attractions in this third in the series.”
—Booklist