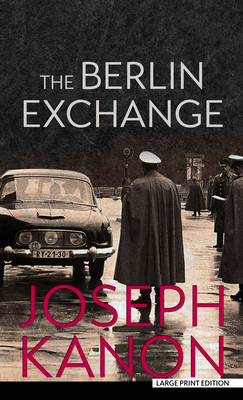 From "master of the genre" (The Washington Post) Joseph Kanon, an espionage thriller set at the height of the Cold War, when a captured American who has spied for the KGB is swapped by the British and returns to East Berlin needing to know who arranged his release and what they want from him. Berlin. 1963. The height of the Cold War. An early morning spy swap, not at the familiar setting for such exchanges, or at Checkpoint Charlie, where international visitors cross into the East, but at a more discreet border crossing, usually reserved for East German VIPs. The Communists are trading two American students caught helping people to escape over the wall and an aging MI6 operative. On the other side of the trade: Martin Keller, a physicist who once made headlines, but who then disappeared into the English prison system. Keller's most critical possession: his American passport. Keller's most ardent desire: to see his ex-wife Sabine and their young son. The exchange is made with the formality characteristic of these swaps. But Martin has other questions: who asked for him? Who negotiated the deal? The KGB? He has worked for the service long enough to know that nothing happens by chance. They want him for something. Not physics--his expertise is out of date. Something else, which he cannot learn until he arrives in East Berlin, when suddenly the game is afoot. Filled with intriguing characters, atmospheric detail, and plenty of action Kanon's latest espionage thriller is one you won't soon forget.

Joseph Kanon is the Edgar Award-winning author of The Accomplice, Defectors, Leaving Berlin, Istanbul Passage, Los Alamos, The Prodigal Spy, Alibi, Stardust, and The Good German, which was made into a major motion picture starring George Clooney and Cate Blanchett. He lives in New York City.