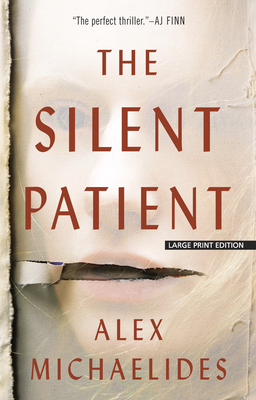 “The Silent Patient is an outstanding thriller centered on a spellbinding mystery with a shocking twist; in other words, you are going to love this book. Alicia was a talented painter and devoted wife until the night she was discovered still as a statue and covered in blood, having apparently killed her husband. The answer as to why has remained locked inside of Alicia, who stops speaking following the murder. Six years later, Theo, a young psychologist, is determined to get the mysterious Alicia to spill all of her secrets. The final surprise will have you rethinking every riveting scene in this brilliant debut.”
— Luisa Smith, Book Passage, Corte Madera, CA

The Silent Patient is a shocking psychological thriller of a woman's act of violence against her husband--and of the therapist obsessed with uncovering her motive.

Alicia Berenson's life is seemingly perfect. A famous painter married to an in-demand fashion photographer, she lives in a grand house with big windows overlooking a park in one of London's most desirable areas. One evening her husband Gabriel returns home late from a fashion shoot, and Alicia shoots him five times in the face, and then never speaks another word.

Alicia's refusal to talk, or give any kind of explanation, turns a domestic tragedy into something far grander, a mystery that captures the public imagination and casts Alicia into notoriety. The price of her art skyrockets, and she, the silent patient, is hidden away from the tabloids and spotlight at the Grove, a secure forensic unit in North London.

Theo Faber is a criminal psychotherapist who has waited a long time for the opportunity to work with Alicia. His determination to get her to talk and unravel the mystery of why she shot her husband takes him down a twisting path into his own motivations--a search for the truth that threatens to consume him....

Alex Michaelides was born in Cyprus in 1977 to a Greek-Cypriot father and an English mother. He studied English literature at Cambridge University and got his MA in screenwriting at the American Film Institute in Los Angeles. The Silent Patient is his first novel.