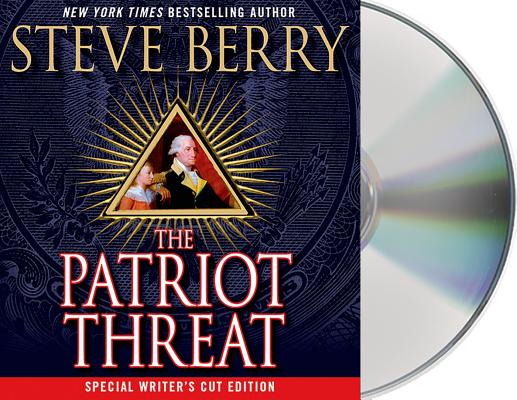 This is book number 10 in the Cotton Malone series.

In an innovative new approach, Macmillan Audio and Steve Berry have produced an expanded, annotated Writer's Cut audiobook edition of The Patriot Threat.

The 16th Amendment to the Constitution legalized federal income tax, but what if there were problems with the 1913 ratification of that amendment? Secrets that call into question decades of tax collecting. There is a surprising truth to this possibility-a truth wholly entertained by Steve Berry, a top-ten New York Times bestselling writer, in his new thriller, The Patriot Threat.

His protagonist, Cotton Malone, once a member of an elite intelligence division within the Justice Department known as the Magellan Billet, is now retired. But when his former boss, Stephanie Nelle, asks him to track a rogue North Korean who may have acquired some top secret Treasury Department files-the kind that could force the United States to its knees-Malone is vaulted into a harrowing twenty-four-hour chase that begins on the water in Venice and ends in the remote highlands of Croatia.

With appearances by Franklin Roosevelt, Andrew Mellon, and a curious painting that still hangs in the National Gallery of Art, Steve Berry's trademark mix of history and suspense is 90% fact and 10% exciting speculation, a provocative thriller that poses a dangerous question: What if the Federal income tax is illegal?

Scott Brick first began narrating audiobooks in 2000, and after recording almost 400 titles in five years, AudioFile magazine named Brick a Golden Voice and “one of the fastest-rising stars in the audiobook galaxy.” He has read a number of titles in Frank Herbert’s bestselling Dune series, and he won the 2003 Science Fiction Audie Award for Dune: The Butlerian Jihad. Brick has narrated for many popular authors, including Michael Pollan, Joseph Finder, Tom Clancy, and Ayn Rand. He has also won over 40 AudioFile Earphones Awards and the AudioFile award for Best Voice in Mystery and Suspense 2011. In 2007, Brick was named Publishers Weekly’s Narrator of the Year.

Brick has performed on film, television and radio. He appeared on stage throughout the United States in productions of Cyrano, Hamlet, Macbeth and other plays. In addition to his acting work, Brick choreographs fight sequences, and was a combatant in films including Romeo and Juliet, The Fantasticks and Robin Hood: Men in Tights. He has also been hired by Morgan Freeman to write the screenplay adaptation of Arthur C. Clarke’s Rendezvous with Rama.