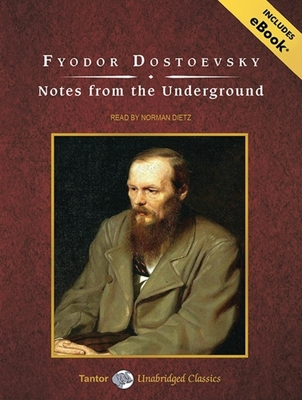 By Fyodor Dostoevsky, Norman Dietz (Narrated by)
$24.99
Not Currently On The Shelf, But We Can Ship It To You In 3-5 Days

A predecessor to such monumental works as Crime and Punishment and The Brothers Karamazov, Notes from the Underground represents a turning point in Fyodor Dostoevsky's writing toward the more political side. In this work, we follow the unnamed narrator of the story, who, disillusioned by the oppression and corruption of the society in which he lives, withdraws from that society into the underground. This "Underground Man" is one of the first genuine antiheroes in European literature. The first part of this unusual work is often treated as a philosophical text in its own right; the second part illustrates the theory of the first by means of its own fictional practice. A dark and politically charged novel, Notes from the Underground shows Dostoevsky at his best. This version of Notes from the Underground is the translation by Constance Garnett.

Fyodor Dostoevsky (1821-1881) was a Russian author whose best-known works include"Notes from the Underground," "Crime and Punishment," "The Idiot," and "The Brothers Karamazov."

Norman Dietz, a writer, an actor, and a solo performer, has recorded over 150 audiobooks, many of which have earned him awards from "AudioFile" magazine, the ALA, and "Publishers Weekly." Additionally, "AudioFile" named Norman one of the Best Voices of the Century.