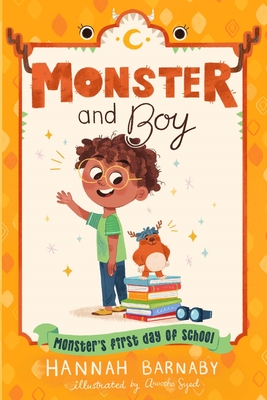 By Hannah Barnaby, Anoosha Syed (Illustrator)
$6.99
Unavailable
Not Yet Published

This is book number 2 in the Monster and Boy series.

Monster and Boy are back for another adventure! And this time the best friends are headed somewhere no monster has ventured before: school!

Ever since Monster (who sleeps under the bed) and Boy (who sleeps in the bed) met and became best friends, they've been spending their days playing together. But some days, Boy leaves and Monster is alone. Wanting to learn more about where his friend goes, Monster makes a plan to go with Boy to . . . school! There, Monster meets Boy's teacher and classmates, learns about cubbies and the sharing circle, and even helps solve a mystery when a pet hedgehog goes missing.

Told with a warm, cozy voice, Hannah Barnaby's story is brought to life with adorable two-color illustrations by Anoosha Syed. Filled with adventure and humor, Monster and Boy: Monster's First Day of School is a perfect chapter book for sharing with kids just aging out of picture books and for newly independent readers.

Hannah Barnaby has worked as a children’s book editor, a bookseller, and a teacher of writing for children and young adults. She holds an MA in children’s literature from Simmons College and an MFA in writing for children and young adults from Vermont College. Her first novel, Wonder Show, was a William C. Morris nominee. Hannah lives in Charlottesville, Virginia, with her family.

Anoosha Syed is a Pakistani-Canadian illustrator based in Toronto. She has a passion for creating cute characters with an emphasis on diversity and inclusion, and has illustrated many best-loved books for children. She is the illustrator of Bug Girl and Bug Girl: Fury on the Dance Floor, as well as I Am Perfectly Designed, written by Karamo Brown, and the Monster and Boy chapter book series, written by Hannah Barnaby.

When Anoosha isn't drawing for work, she's drawing for fun (she doesn't really have any other hobbies).

"The full-speed-ahead enthusiasm of Garcia and Colette is infectious. Telling one story well is enough of a challenge, but this book perfectly balances two stories and the characters within them, adding up to more than the sum." —Kirkus Reviews, starred review

Some of the Parts:

"Barnaby’s elegant, well-paced novel stands out from others examining the death of a loved one both for its understated writing and for its penetrating exploration of the outer limits of grief and guilt." —Publishers Weekly, starred review

"Infused with nostalgia and affection, this celebration of the deliberately constructed self will hold readers in its spell from beginning to end." —Kirkus Reviews, starred review