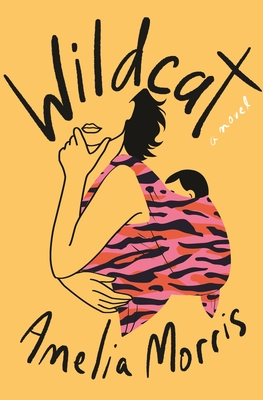 Wildcat is an uproariously funny, surprisingly touching story of one woman’s journey through motherhood and female friendship, in a society that plays fast and loose with information.

New mother, aspiring writer, and former shopgirl Leanne has lost her way. As she struggles with both her grief and the haze of motherhood, it also becomes clear that her best friend, the default queen of East Side Los Angeles, Regina Mark, might not actually be a friend at all.

As Leanne begins to investigate and undermine Regina, she also strikes up an unexpected friendship with the lauded writer Maxine Hunter. Feeling frustrated and invisible next to Regina’s wealth and social standing, Leanne seeks security wherever she can find it, whether that’s by researching whether she should vaccinate her son, in listening to the messages she thinks her father is sending from beyond the grave, or in holding her own against a petulant student in her creative writing class. Most of all, however, she looks for it within Maxine, who offers Leanne something new.

With a keen eye for the trappings of privilege, class, and the performative nature of contemporary domestic life, Amelia Morris’s tender and wicked debut shows us a woman who bucks against the narrative she’s been fed, only to find power in herself and the truth that emerges.

Amelia Morris is the author of the blog, Bon Appétempt (named one of the twenty-five best blogs of the year by TIME magazine) as well as the memoir by the same name. Her work has appeared in the Los Angeles Times, McSweeney’s, The Millions, and USA Today. She is also the co-creator of the podcast, Mom Rage. She lives in Los Angeles with her family.

A MOST ANTICIPATED BOOK of FEBRUARY by LA Times, Bustle, The Millions, Alta Journal and more!

"The thing I was prepared to like least about Amelia Morris’s funny and engrossing debut novel—new motherhood and all the requisite growing pains—ultimately became the thing I admired about it most... Wildcat was a book I couldn’t set down for long." —The New York Times

"Like Dana Spiotta's Wayward but funnier, the novel is also a hard look at the role of social media in women's lives... A smart, juicy, of-the-moment read." —Kirkus, starred review

"In this sly and funny commentary on the institution of motherhood, Morris... delivers a compulsively readable product. With short chapters and buttery-smooth prose, it’s also an exploration of the ebbs and flows of female friendship and how people can betray each other in microscopic ways..." —Booklist, starred review

"A witty, wise examination of friendship, class and family, and a hilarious, pitch perfect send-up of L.A’.s bougie-bohemian class" —People, Book of the Week Pick

"Amelia Morris writes into reality—the beautiful and the ugly, the way we inevitably measure ourselves against one another. Vibrant and fast-moving, Wildcat is on its surface a compelling read, but it also has bite. The novel is dark and eviscerating on class and entitlement while Morris is funny and sharp on the page. Her movement into fiction is a true reward to readers."
—Megan Mayhew Bergman, author of Birds of a Lesser Paradise

“Wildcat is a sharp, funny, richly wrought take on trying to be both mother and whatever else one sets out to be. Immensely readable and deeply felt, Morris takes readers through the particularly wild and prickly world of a certain type of female friendship in all its complicated, shameful, and sometimes deeply satisfying forms.”
—Lynn Steger Strong, author of Want

"Wildcat is that rare novel I'm always in the mood to read: at once laugh-at-loud funny and deeply serious, page-turning and smart. Amelia Morris tackles contemporary motherhood—with its social media-induced peer pressure, its confusing isolation, its complicated beauty—with the sharpest wit and a tenderness that takes my breath away. I loved this book. I want to press it into the hands of...everyone.”
—Edan Lepucki, bestselling author of Woman No. 17 and California

"Wildcat is a delightful, searingly accurate novel about the insecurity of new motherhood meeting the seduction of toxic friendships. In writing that manages to be tender, precise, and funny, Morris tells the story of a woman in a state of becoming, caught between what’s natural and what’s wild. And with witty sendups of a certain kind of L.A. style and the absurdity of influencer culture, Wildcat reminded me what juicy fun disappearing into a good book can be."
—Aja Gabel, author of The Ensemble

"Wildcat is a sharp, tight debut, marking Morris as a writer to watch." —Wilmington Star News