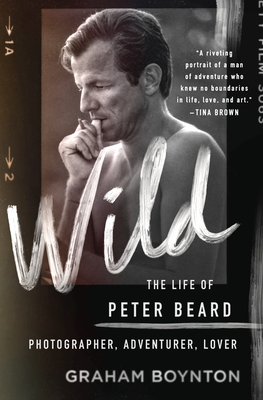 Graham Boynton's Wild is the definitive biography of photographer Peter Beard, a larger-than-life icon who pushed the boundaries of art and scandalized international high society with his high-profile affairs.

He was the original 20th century “enfant terrible” with the looks of a Greek god who blazed like a comet across the worlds of art, photography, and fame. The scion of several old WASP fortunes, he was by instinct an adventurer, and the more dangerous the escapade, the better: whether he was hunting big game in Africa, ingesting epic quantities of drugs, or pursuing the most beautiful women in the world. Among his friends were Jackie Onassis, Andy Warhol, and Francis Bacon. When Peter Beard died in 2020 after mysteriously disappearing from his Montauk home, he remained an enigma to even his closest friends.

Journalist and author Graham Boynton was a friend for more than 30 years, spending time with Beard at his bush camp in Africa, in London, and at his Long Island home. From hundreds of Boynton’s interviews with Beard’s closest friends, former lovers, and fellow artists comes this intimate portrait of a man Sir Mick Jagger called “a visionary.”

GRAHAM BOYNTON was raised in Bulawayo, Rhodesia (now Zimbabwe), and later emigrated to South Africa, where he attended Natal University and worked as a journalist. In 1975 he was expelled from South Africa because of his opposition to apartheid. He worked for many years as a journalist in London before translocating to New York where he worked for a decade for Conde Nast as a writer and editor. Since 1998 he has lived in London working as an author and newspaper and magazine journalist. He is the author of The Last Days in Cloud Cuckooland.

“In this densely researched portrait, Boynton vibrantly captures the mercurial nature of a spectacular, exuberant, insatiable, and committed adventurer, photographer, and artist.” --Booklist

“Boynton captures Africa’s spirit along with an expert character sketch, making this as inspiring as it is provocative. Readers will relish this account of a one-of-a-kind life.” –Publishers Weekly

“An engrossing account of an elusive artist.” –Kirkus Reviews

“A riveting portrait of a man of adventure who truly knew no boundaries in life, love and art.” –Tina Brown

“[Boynton] does a masterful job of assembling the facts of Beard’s chaotic life and conveying the volcanic energy of the man, even as he makes a strong case for his achievement as an artist.” –Jay McInerney

“The definitive account of the life of a truly wild man.” –Simon Winchester

“In this magnificent biography Graham Boynton gives us a picture of a life that could have been scripted jointly by Blixen and Hemingway. A brilliantly enjoyable read – a triumph.” –Alexander McCall Smith, bestselling author of The No. 1 Ladies’ Detective Agency

“Boynton teases out the complexities and contradictions that made this heir of railroad money a fascination to English royals and African guides alike…beautifully written, fast and fun, Wild has colorful characters on every page. The most compelling is Beard himself, pinned to the page in this first account since his most dramatic death.”--Michael Shnayerson, Vanity Fair contributing editor and author of Boom: Mad Money, Mega Dealers, and the Rise of Contemporary Art