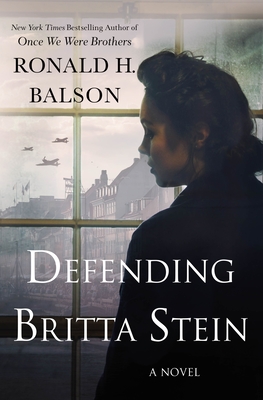 Defending Britta Stein is a story of bravery, betrayal, and redemption—from Ronald H. Balson, the winner of the National Jewish Book Award

Chicago, 2018: Ole Henryks, a popular restauranteur, is set to be honored by the Danish/American Association for his many civic and charitable contributions. Frequently appearing on local TV, he is well known for his actions in Nazi-occupied Denmark during World War II—most consider him a hero.

Britta Stein, however, does not. The ninety-year-old Chicago woman levels public accusations against Henryks by spray-painting “Coward,” “Traitor,” “Collaborator,” and “War Criminal” on the walls of his restaurant. Mrs. Stein is ultimately taken into custody and charged with criminal defacement of property. She also becomes the target of a bitter lawsuit filed by Henryks and his son, accusing her of defamation and intentional infliction of emotional distress.

Attorney Catherine Lockhart, though hesitant at first, agrees to take up Mrs. Stein's defense. With the help of her investigator husband, Liam Taggart, Lockhart must reach back into wartime Denmark and locate evidence that proves Mrs. Stein's innocence. Defending Britta Stein is critically-acclaimed author Ronald H. Balson's thrilling take on a modern day courtroom drama, and a masterful rendition of Denmark’s wartime heroics.

RONALD H. BALSON is an attorney, professor, and writer. His novel The Girl From Berlin won the National Jewish Book Award and was the Illinois Reading Council's adult fiction selection for their Illinois Reads program. He is also the author of Defending Britta Stein, Eli’s Promise, Karolina's Twins, The Trust, Saving Sophie, and the international bestseller Once We Were Brothers. He has appeared on many television and radio programs and has lectured nationally and internationally on his writing. He lives in Chicago.

"This brilliantly imagined novel [is] part courtroom drama, part historical reckoning. Chock-full of finely wrought detail about the war and dashed with suspense and intrigue, it's a must-read for historical fiction buffs." —Newsweek

"The storytelling is gripping, and the book showcases the unity and bravery of the Danish people in saving most of their population of Jews during World War II." —Bookreporter

"More chilling than anything from the pen of Stephen King, Defending Britta Stein is a redemptive tale of seeking justice and setting the record straight...It will stay with you long after the final page is turned.” —Jay Roberts, Mystery Scene

"I have always had a fascination with WWII, and reading this book gave me an insight to the way the Danish people managed to thwart the German occupation of their country. Good triumphing over evil is something to cheer for." —Deadly Pleasures

"This is historical fiction at its best...mystery, intrigue, suspense, and history, all intertwined into a riveting novel." —Elise Cooper, Military Press

"I love the Liam Taggart and Catherine Lockhart novels. They’re always well written and the characters are like old friends to visit every year...Another winner from Ronald H. Balson." —Red Carpet Crash

Praise for Eli's Promise:
"A captivating saga of the Holocaust and its aftermath spanning decades and continents...Balson’s meticulous historical detail, vivid prose and unforgettable characters further solidify his place among the most esteemed writers of historical fiction today." —Pam Jenoff, bestselling author of The Lost Girls of Paris

"A powerful, superbly crafted tale...equal parts heartbreaking and life affirming, with themes that are as relevant today as ever. Eli's Promise is historical fiction at its finest, a riveting page turner that will hook readers from the start." —Jane Healey, bestselling author of The Beantown Girls

"Balson pulls no punches...His story is a five star version of a period of history that proved a horror for those living in it." —Stacy Alesi, BookBitch

"Balson juggles between his three stories effectively, writing with great emotion but without overt melodrama, always aware of the tragic ways in which history repeats itself." —Bill Ott, Booklist

"A fascinating mystery that will stick with readers for weeks." —Minneapolis Star Tribune

“A fascinating, fast-paced dual-narrative that I could not put down. It is a heart-wrenching story of survival, hope and, ultimately, redemption that is sure to thrill!” —Jane Healey, author of The Saturday Evening Girls Club