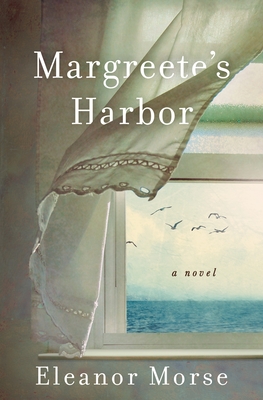 A literary novel set on the coast of Maine during the 1960s, tracing the life of a family and its matriarch as they negotiate sharing a home.

Eleanor Morse's Margreete’s Harbor begins with a fire: a fiercely-independent, thrice-widowed woman living on her own in a rambling house near the Maine coast forgets a hot pan on the stovetop, and nearly burns her place down.

When Margreete Bright calls her daughter Liddie to confess, Liddie realizes that her mother can no longer live alone. She, her husband Harry, and their children Eva and Bernie move from a settled life in Michigan across the country to Margreete’s isolated home, and begin a new life.

Margreete’s Harbor tells the story of ten years in the history of a family: a novel of small moments, intimate betrayals, arrivals and disappearances that coincide with America during the late 1950s through the turbulent 1960s. Liddie, a professional cellist, struggles to find space for her music in a marriage that increasingly confines her; Harry’s critical approach to the growing war in Vietnam endangers his new position as a high school history teacher; Bernie and Eva begin to find their own identities as young adults; and Margreete slowly descends into a private world of memories, even as she comes to find a larger purpose in them.

This beautiful novel—attuned to the seasons of nature, the internal dynamics of a family, and a nation torn by its contradicting ideals—reveals the largest meanings in the smallest and most secret moments of life. Readers of Elizabeth Strout, Alice Munro, and Anne Tyler will find themselves at home in Margreete’s Harbor.

ELEANOR MORSE is the author of White Dog Fell from the Sky and An Unexpected Forest, which won the Independent Publisher’s Gold Medalist Award for Best Regional Fiction in the Northeast United States, and was selected as the Winner of the Best Published Fiction by the Maine writers and Publishers Alliance. Morse has taught in adult education programs, in prisons, and in university systems, both in Maine and in southern Africa. She lives on Peaks Island, Maine.

"Margreete's Harbor is an exquisite family epic of many moods and much dramatic incident. I experienced the character of Liddie as sent from a George Eliot novel into 1950's and 1960's brooding coastal Maine — Liddie is magnificently compelling, like an actress you cannot take your eyes away from. Eleanor Morse has more gifts as a writer than you could count on an abacus."
—Howard Norman, author of The Ghost Clause and The Bird Artist

"Timely as well as timeless, heartfelt as well as heartbreaking, this beautiful novel of a family at the crossroads of becoming reminds us of the very real perils of aging, the legacies bequeathed as generations succeed each other, the betrayals that shape us, and the sustaining strength of the ties that bind."
—Janet Peery, author of The River Beyond the World and The Exact Nature of Our Wrongs

“I was held spellbound by the brilliance and beauty of Margreete's Harbor. The family, the children, the music, the pets, the senile grandmother, the idealistic father, still live in Maine, in my heart and mind, like all the very best novels we are given to treasure.”
—Nancy Thayer, best-selling author of Girls of Summer

“Margreete’s Harbor is a novel that embraces your neighborhood, then the people who live on the other side of the world; then you. It cradles us all and shakes us awake. If you don’t want to feel your heart expand or to live a bit closer to your own bones, don’t read this book. If you want to feel more, to understand more than you felt and thought yesterday, start reading and don’t stop.”
—Sena Jeter Naslund, best-selling author of Ahab’s Wife

“Margreete's Harbor breaks and mends the heart in the way of all great literature. It’s a collective story, roaring with love in the little moments. Profound revelations about relationships, emotions, and life in general. Descriptions of land, place, animals, and the natural world: some of the best I've ever read. The narrative moves with power, grace, and vivid music through history and the characters simultaneously--and differently. The people Morse writes are so real that I wouldn’t be surprised to meet them on the street.”
—Neela Vaswani, author of Where the Long Grass Bends

"Eleanor Morse's Margreete's Harbor, a polyphonic novel in which each voice is earned yet blends seamlessly with the others, shines with its author's warmth, humanity, and intelligence: I'm a better person for having read it.”
—Robin Lippincott, author of Our Arcadia