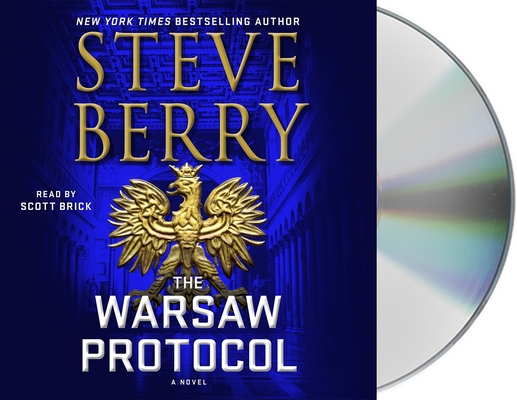 Critically-acclaimed and award-winning narrator Scott Brick returns to his role as Cotton Malone — eponymous hero of Berry's iconic New York Times bestselling series — as the seven precious relics of the Arma Christi, the weapons of Christ, disappear one by one from sanctuaries across the world.

"Brick is a masterful narrator, raising the tension in the action scenes while keeping the listener engaged in the slower historical segments." - AudioFile Magazine on The Malta Exchange

"Narrator Scott Brick's smooth voice flows with the twists and turns of Berry's political thriller...Secrets unravel, and tensions rise as Brick shifts vocal focus from the historical secret society to contemporary conspirators who include corrupt politicians and judges." — AudioFile Magazine on The Lost Order

Scott Brick first began narrating audiobooks in 2000, and after recording almost 400 titles in five years, AudioFile magazine named Brick a Golden Voice and “one of the fastest-rising stars in the audiobook galaxy.” He has read a number of titles in Frank Herbert’s bestselling Dune series, and he won the 2003 Science Fiction Audie Award for Dune: The Butlerian Jihad. Brick has narrated for many popular authors, including Michael Pollan, Joseph Finder, Tom Clancy, and Ayn Rand. He has also won over 40 AudioFile Earphones Awards and the AudioFile award for Best Voice in Mystery and Suspense 2011. In 2007, Brick was named Publishers Weekly’s Narrator of the Year.

Brick has performed on film, television and radio. He appeared on stage throughout the United States in productions of Cyrano, Hamlet, Macbeth and other plays. In addition to his acting work, Brick choreographs fight sequences, and was a combatant in films including Romeo and Juliet, The Fantasticks and Robin Hood: Men in Tights. He has also been hired by Morgan Freeman to write the screenplay adaptation of Arthur C. Clarke’s Rendezvous with Rama.

Advance Praise for The Warsaw Protocol