At the Wolf's Table: A Novel (Paperback) 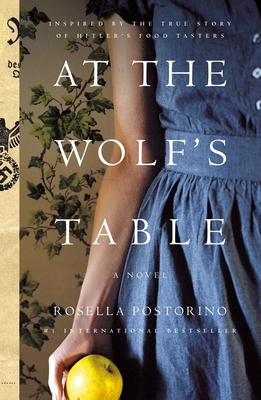 By Rosella Postorino, Leah Janeczko (Translated by)
$16.99
On Our Shelves Now

Themes of guilt, regrets, and shame are center in this engrossing novel. It is a well-written story of survival in dangerous circumstances. The dynamics between characters is extremely well portrayed as well as the grey shades of morality. Serious and thoughtful!

The international bestseller based on a haunting true story that raises provocative questions about complicity, guilt, and survival.

They called it the Wolfsschanze, the Wolf’s Lair. “Wolf” was his nickname. As hapless as Little Red Riding Hood, I had ended up in his belly. A legion of hunters was out looking for him, and to get him in their grips they would gladly slay me as well.

Germany, 1943: Twenty-six-year-old Rosa Sauer’s parents are gone, and her husband Gregor is far away, fighting on the front lines of World War II. Impoverished and alone, she makes the fateful decision to leave war-torn Berlin to live with her in-laws in the countryside, thinking she’ll find refuge there. But one morning, the SS come to tell her she has been conscripted to be one of Hitler’s tasters: three times a day, she and nine other women go to his secret headquarters, the Wolf’s Lair, to eat his meals before he does.

Forced to eat what might kill them, the tasters begin to divide into The Fanatics, those loyal to Hitler, and the women like Rosa who insist they aren’t Nazis, even as they risk their lives every day for Hitler’s. As secrets and resentments grow, this unlikely sisterhood reaches its own dramatic climax, as everyone begins to wonder if they are on the wrong side of history.

Praise for At the Wolf’s Table

“Engrossing…At the Wolf’s Table is Postorino’s first novel to be translated into English from her native Italian. Her ability to beautifully convey feelings of guilt, shame, love and remorse in a single gesture is a sign that we will be hearing more from her.”
—The New York Times Book Review

“This book—which speaks of love, hunger, survival and remorse—will end up engraved on your heart.”
—Marie Claire (Italy)

“As engaging as a great film.”
—Vanity Fair (Italy)

“A superb retelling…Unputdownable.”
—The Herald (Scotland)

“Unsettling and compelling… At the Wolf’s Table stays with you, and for a long time.”
—La Repubblica

“Masterful…A unique story in which every reader will see themselves reflected.”
—L’Unione Sarda

“You’ll fly into this novel with your heart in your throat and a constant feeling of identification all the way through to the final, magnificent chapter.”
—Io Donna

“A necessary book of great power that brings to mind Primo Levi’s The Drowned and the Saved and the finest Italian fiction.”
—La Riviera