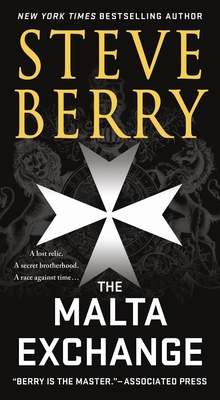 This is book number 14 in the Cotton Malone series.

"The result is a thriller that intrigues and provides historical context. Berry is the master scientist with a perfect formula." — Associated Press

One of USA Today's "Five Books Not to Miss!"

The pope is dead. A conclave to select his replacement is about to begin. Cardinals are beginning to arrive at the Vatican, but one has fled Rome for Malta in search of a document that dates back to the 4th century and Constantine the Great.

Former Justice Department operative, Cotton Malone, is at Lake Como, Italy, on the trail of legendary letters between Winston Churchill and Benito Mussolini that disappeared in 1945 and could re-write history. But someone else seems to be after the same letters and, when Malone obtains then loses them, he’s plunged into a hunt that draws the attention of the legendary Knights of Malta.

The knights have existed for over nine hundred years, the only warrior-monks to survive into modern times. Now they are a global humanitarian organization, but within their ranks lurks trouble — the Secreti — an ancient sect intent on affecting the coming papal conclave. With the help of Magellan Billet agent Luke Daniels, Malone races the rogue cardinal, the knights, the Secreti, and the clock to find what has been lost for centuries. The final confrontation culminates behind the walls of the Vatican where the election of the next pope hangs in the balance.

“Enthralling . . . Fans of Dan Brown will have fun, and some may even prefer Berry’s action-oriented hero to Brown’s cerebral Robert Langdon.” — Publishers Weekly, Starred Review

“Berry has the lock on making history zing with breathless suspense and galloping action. Malta and the Vatican are superb settings for this ecclesiastical extravaganza.” — Library Journal, starred review

“The intrigue is intense . . . . Thriller fans will have their violence fix, but the real fun is in learning about the inner workings of the church, its history dating all the way back to Constantine, and the troubled past of Malta . . . . This one will appeal to Dan Brown fans and anyone else in the mood for a page-turning yarn.” —Kirkus Reviews

"[Berry] really is very good at the historical-conspiracy thriller; he’s a skilled writer—much more so than Dan Brown, to whom he's often compared—and a more dexterous plotter than many of his contemporaries. Fans of the Malone series will give this one an enthusiastic thumbs-up.” — Booklist

“Cotton Malone has slowed down just slightly—though he still joins the action when it’s fully engaged—but Berry hasn’t lost a step. This one has all the elements—nothing magical, but much that’s mysterious and secretly held, and plenty that has to be settled by military combat if civilization is to survive.” — Sullivan County Democrat

“Berry again produces a novel that at once entertains and also raises deep and disturbing questions.” — Fredericksburg Free Lance-Star

“Steve Berry has mastered the art of page-turning.” — Booktrib