Monograph on the Fossil Reptilia of the London Clay: And of the Bracklesham and Other Tertiary Beds (Cambridge Library Collection - Monographs of the Palaeontogr) (Paperback) 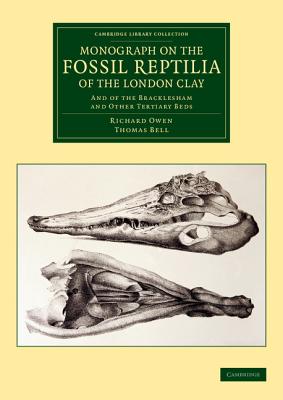 Covering a wide area of the London and Hampshire basins, the London Clay has been famous for over two hundred years as one of the richest Eocene strata in the country. In this work, first published between 1849 and 1858, Fellows of the Royal Society Richard Owen (1804-92) and Thomas Bell (1792-1880) describe their findings from among the reptilian fossils found there. The book is divided into four parts, covering chelonian, crocodilian, lacertilian and ophidian fossils, and includes an extensive section of detailed illustrations. Using his characteristic 'bone to bone' method and an emphasis on taxonomy, Owen draws some significant conclusions; he shows that some of Cuvier's classifications were wrongly extended to marine turtles, and adds to the evidence for an Eocene period much warmer than the present. The work is a fascinating example of pre-Darwinian palaeontology by two scientists later much involved in the evolutionary controversy.