Under The Radar Michigan: The Next 50 (Paperback) 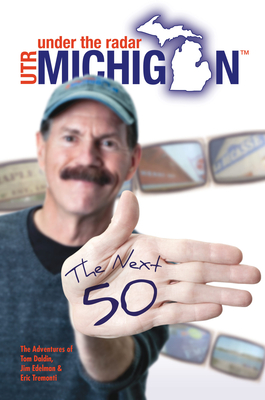 By Tom Daldin, Jim Edelman, Eric Tremonti
$24.95
Not Currently On The Shelf, But We Can Ship It To You In 3-5 Days

“Under the Radar Michigan” is an Emmy award winning PBS television series that features the cool people, places and things that make Michigan a great place to live, work and play. If you’re looking for awesome Michigan places to explore, vacation, eat, live, start a business or just kick backand relax, this book is for you.

In this, our second installment, chapter by chapter we take you along with us on our ‘next’ fifty episodes. Get ready to discover cool Michigan cities, interesting people, incredible restaurants, romantic spaces and great places to vacation with the whole family. You’ll climb to the top of the Mackinac Bridge; go cliff diving in Lake Superior; savor the flavor of fantastic foods; ride the North Pole Express; meander through magnificent museums; explore great parks, trails and places to camp; fish the great lakes; meet people making a difference and have unbelievable urban adventures. You won’t believe what’s right in your own backyard.

So, once again, join us. I guarantee you’ll learn so much about Michigan, you’ll never want to leave. Grab this (and our first) book, collect your car keys and make this great state your next big adventure.

Host and co-creator of Under The Radar Michigan, Tom Daldin is an Emmy award-winning producer, actor and writer who has created programs that have aired across Michigan and around the U.S. on PBS. He has also won a number of "best actor" awards in both commercial television and industrial films. Growing up in Birmingham, Michigan, Tom has always been a fan of travel. At the age of 12 he joined the World Adventure Series Club at the Detroit Institute of Arts, where his mother would drop him off to watch travel log films. After graduation from Oakland University with a degree in journalism, Tom, his wife Cathy and their children have turned Michigan into their vacation playground, exploring its many wonders and attractions. Tom loves people and loves where he lives.

Jim Edelman’s path to television producer took him from Radio Talk Show Producer to Radio Promotion Director to Radio Sales Manager to National Radio Sales (Jim loved radio). Jim’s attention to detail, idea generation and the sales chops to keep the show funding flowing, help complete the circle of skills for Under the Radar Michigan. UTR fulfills a lifelong mission to combine the best of his sales skills with the creative guy that’s always been lurking in the shadows. His love of storytelling and searching or off-beat, little known stories really makes his day. Jim attended many colleges but learned more working for the Detroit Pistons, as a Ski Instructor, Cycle Racing Producer, Tomato Picker and Bakers Assistant. He lives in Salem, Michigan and insists that he’s quite normal despite owning three cats.

Eric Tremonti brought his love for positive storytelling to the UTR Michigan team after fifteen years in advertising production. Joining midway through UTR’s first season, Eric wears multiple hats, including director, camera operator, producer, editor and post production manager. Eric will tell you that working on UTR is the second best job he's ever had because it's given him the opportunity to spend more time on his first bestest job, that of world’s greatest dad to his two young daughters. When he's not hard at work on either job, you can find Eric pursuing his passion for all things green in his garden and community farm plot. Eric is also a self-proclaimed super cooker guy and food aficionado.