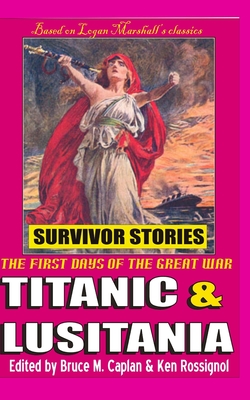 By Bruce M. Caplan (Editor), Logan Marshall, Ken Rossignol (Editor)
$14.95
Not Currently On The Shelf, But We Can Ship It To You In 3-5 Days

The best of the Logan Marshall classics have been researched and edited by authors Bruce M. Caplan and Ken Rossignol and presented in this new book. The Titanic's secret fire is explained in great detail.The early days of World War I and the savage sinking of the Lusitania which caused over 1,000 civilians to die on an unarmed passenger vessel are brought to life.Great photos of both ships and the people who survived along with the war posters which boosted the efforts of the United States, Britain and France to rally their countries to stand up to the German aggression.

Bruce M. Caplan is the best-selling author of The Sinking of the Titanic, which has sold 100,000 copies around the world since 1996. Caplan is a speaker and author and lives in Redmond, Washington. Ken Rossignol writes cruise thrillers, maritime history and true crime and has appeared on a dozen ships speaking about maritime history. Rossignol has appeared on Good Morning America, 20/20 and Discovery ID. Both Caplan and Rossignol make appearances at the Titanic Museums in Pigeon Forge Tennessee and Branson, Missouri.