More Birds Than Bullets: My Life with Birds (Paperback) 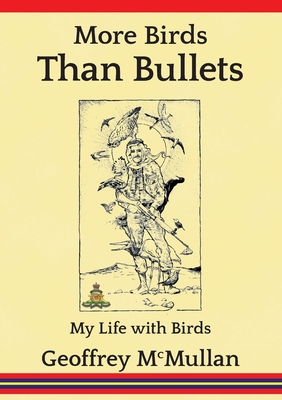 'More Birds Than Bullets' is not just as the title suggests, there is more to it than that, it can be seen as a metaphor for life's experiences. I struggled with how I should go about writing it, should it be factual, or should it be like a novel? In the end I decided to write about my experiences from my time in the army through to civilian life, I have included some facts about birds, and rather than write out a long list of the birds I have seen, I concentrate instead on a small number of birds in slightly more detail...

My aim is to give you an insight into my world as a birder, the stories are true and based on my experiences. I have changed names to protect people, unless it shows them in a good light as it's not my intention to cause harm to anyone. I will share with you some of my background and my relationship with birds, people, and the countries I have visited, and how they formed my understanding of the world by concluding with my transition from civilian, to military and back to civilian life. I hope you find it amusing, informative.

I would also like to thank the following people for their input: Cliff Wright my good friend who painted the original cover designs of Harry Potter and the Chamber of Secrets and Harry Potter and the Prisoner of Azkaban. I had to drop that one in; and for the excellent drawing on the cover to this book. I am grateful for the wonderful, powerful, and amazing Close Encounters of the Bird Kind.

Brought up in a land of sectarian conflict and for the first half of his working life a soldier in the British Army, Geoffrey McMullan is, I suppose, your average warrior. As he himself loves to tell us, he is six foot four and built like the proverbial shithouse door. But Geoffrey has a softer side as well as a secret inner life that he exposes among all the rambunctious, globe-trotting adventure of this humour-filled memoir. He is one for the birds. Give him a Heart-spotted Woodpecker, it seems, and this great big bear of a man is moved to his soul. Birds? I hear one or two readers ask. Isn't that a bit, well, cissy? What can be so moving or special about birds? The truth is that Geoffrey's passion is both ancient and universal. To the Sufi mystics of central Asia, God was sometimes known as 'the unnamed bird'. For Native Americans - the Cheyenne and Lakota peoples of the American plains - the mythic 'thunderbird' was central to their spiritual lives. In the Andes the Quechua held the condor sacred for thousands of years. Zeus the preeminent deity of the ancient Greeks was represented as an eagle...

The truth is that these creatures are central images for our most cherished ideals - love beauty, inner peace. Geoffrey McMullan knew this instinctively. In his book he describes a moving moment when, as a small boy, to fend off the casual violence of his boarding school, he alighted on a woodpecker on the lawn outside the dining room window. To that troubled child the bird was a source of peace and comfort. He goes on in More Birds than Bullets to show how this understanding has blossomed into a lifelong form of personal therapy. In the second half of his working life, as a teacher on the healing power of the natural world, Geoffrey is again summoning the birds but to demonstrate to others their uplifting potential. Encounters of the feathered kind are written into the DNA of Geoffrey's autobiography.