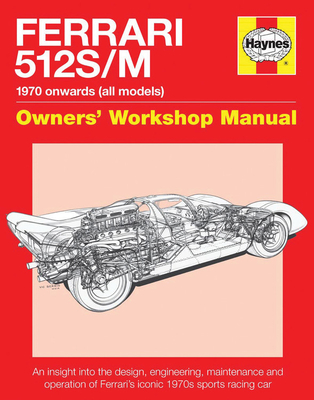 The Ferrari 512 marked the company's return to the World Sports Car Championship, and despite being a late entrant, the 512 was a formidable race car. Such was Ferrari's breadth and depth in motorsport that they were able to mix and match components relatively quickly and the new car was revealed at the 1969 Turin Motor Show although it was only ready to race the following year. Mauro Forghieri, under whose direction the 512 was developed, used a semi-monocoque chassis similar to that of the 612 P Can-Am car, and the car was fitted with a 5-litre V12 engine. The extremely handsome, muscular body was designed by Pininfarina and was available in both sports coupe and spyder format.

Glen Smale's books include Porsche 917: The Complete Photographic History; Jaguar E-type: Portrait of a Design Icon (for which he received the Laurin and Klement "Design Writer of the Year" award in 2007); and Porsche 956/962: A Photographic History. Glen is also editor of Porsche Road & Race, an online journal. He lives in Carmarthenshire, Wales.