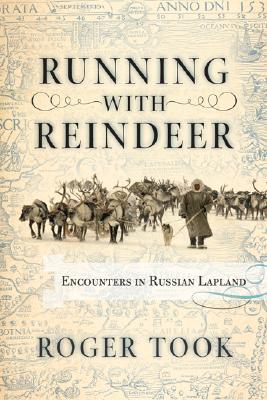 By Roger Took
Email or call for price.
Special Order

Russian Lapland, a region of amazing contrasts. Here lies the last true wilderness of Europe, a rich and pristine ecosystem teeming with bird and animal life. But here too lie the dark, satanic mills of the former Soviet Union and the rotting remnants of nuclear submarines. Running with Reindeer is the first account in over a century to describe life in this harsh but beautiful land. Living among remote reindeer-herding and hunting families, Roger Took spends a decade following the lives and traditions of the indigenous Lapps, or Saami. He meets pioneering villagers descended from medieval Novgorod fur-traders who are now learning to cope with the new economy, and the men and women originally forced north to mine Russian Lapland's fabulous mineral wealth but are now unemployed and stranded. Avoiding the still vigilant security services, he explores the naval bases where nuclear-powered submarines are lying dangerously neglected. His encounters with the land and its inhabitants are dramatic and comical as well as emotionally disturbing and physically dangerous. Moving between the lines of the official histories, coping with arduous Arctic conditions, he writes compellingly, offering a vivid account of a unique part of Europe.

Roger Took is an art historian and museum curator living in London and Ireland. He has held several museum posts in England and is an active Fellow of the Royal Geographic Society.