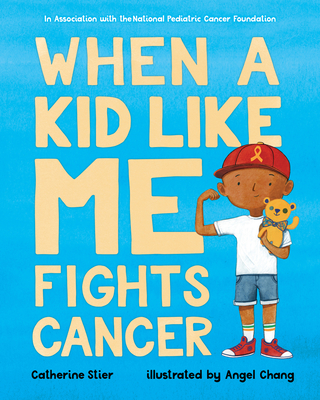 When a young boy finds out he has cancer, he learns a lot right away. He learns that cancer is something you fight, and that cancer isn’t anyone’s fault—especially not his. He discovers that many things change with cancer, but some of the most important things stay the same. He also learns that having cancer is easier when everyone around him wants to help him fight.

Catherine Stier has worked as a professional writer for more than sixteen years and has published hundreds of articles and stories. She is the author of If I Were President, If I Ran for President, and Today on Election Day. She lives in Texas with her husband and two children. Angel Chang illustrates children's books and also works in editorial. She specializes in conceptual drawings and stylized illustrations. Angel has had exhibitions in the U.S. and Taiwan and divides her time between the two countries.

"A child who has cancer learns what this means. The first-person narrator, a kid with light-brown skin and curly black hair, begins the story with the diagnosis: 'We get the news…I find out I'm a kid who has to deal with cancer.' No type of cancer is named. The text focuses gently around a learning theme: that cancer isn't catching and isn't anyone's fault, that researchers far and wide are working on treatments, that 'cancer is something you fight.' This patient has ample emotional support from parents, the medical team, and friends—the town even does a dedicated research fundraiser—and other child patients find moments in the hospital for silliness. However, fatigue and hair loss come along (a red hat is handy), and sometimes child and parent cry together, with sadness and fear unnamed but present. Chang plays with scale, making the kid tiny when enveloped in a parent's arms and showing a bed as extra -long to emphasize its new primary role. Faces express a range of feelings but mildly, which will serve readers who have cancer (or who have friends with cancer) well. Mom has beige skin; the other parent (ungendered and tall) has medium-brown skin and curly black hair. There's no prognosis, but the end hits a comforting note in the final item the protagonist learns: 'I am not fighting alone.' Targeted and right on target." — Kirkus Reviews