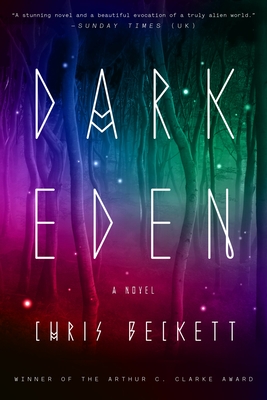 This is book number 1 in the Dark Eden series.

Dark Eden is like no other science fiction I have read. Although it takes place in the future after 5 humans crash land on a distant planet lit only by bioluminescent plants and animals, the action is 5 generations removed from them and follows their descendants who live a hunter-gatherer existence while waiting for rescue and return to Earth. They have an oral tradition to keep the stories and values of Earth alive. Their chief commandment is to stay in the valley of the original crash. However, food is getting scarce. One young man dares to question the wisdom of their deepest held beliefs, insisting that their ancestors would want them to survive and spread beyond the mountain known only as the Snowy Dark. Dark Eden explores the foundations of society, the strength and pitfall of deeply held beliefs, and what it takes to break free from them. Winner of the Arthur C. Clarke Award and well-deserved.

WINNER OF THE ARTHUR C. CLARKE AWARD • “A stunning novel and a beautiful evocation of a truly alien world.”—Sunday Times (UK)

“Beckett renders the terror of the darkness beyond the forests with a riveting deftness that evokes all primordial fears of the unknown.”—N. K. Jemisin, The New York Times Book Review

On the alien, sunless planet they call Eden, the 532 members of the Family take shelter beneath the light and warmth of the Forest’s lantern trees. Beyond the Forest lie the mountains of the Snowy Dark and a cold so bitter and a night so profound that no man has ever crossed it.

The Oldest among the Family recount legends of a world where light came from the sky, where men and women made boats that could cross the stars. These ships brought us here, the Oldest say—and the Family must only wait for the travelers to return.

But young John Redlantern will break the laws of Eden, shatter the Family and change history. He will abandon the old ways, venture into the Dark . . . and discover the truth about their world.

Already remarkably acclaimed in the United Kingdom, Dark Eden is science fiction as literature: part parable, part powerful coming-of-age story, set in a truly original alien world of dark, sinister beauty and rendered in prose that is at once strikingly simple and stunningly inventive.

“Pure astonishment and pleasure, a storytelling ride full of brio and wonder.”—Locus

CHRIS BECKETT is a university lecturer living in Cambridge, England. His short stories have appeared in such publications as Interzone and Asimov’s Science Fiction and in numerous “year’s best” anthologies. In addition to the Arthur C. Clarke award for Dark Eden, he won the Edge Hill Prize, the UK’s premier award for short story collections, for his collection the Turing Test.

“Poetic . . . Beckett renders the terror of the darkness beyond the forests with a riveting deftness that evokes all primordial fears of the unknown. . . . There’s plenty here to intrigue and entrance.”—The New York Times Book Review

“Brilliantly imaginative . . . a superb entertainment, a happy combination of speculative and literary fiction. Not to be missed.”—Booklist (starred)

“Riveting . . . a keenly imagined vision of the interaction between human nature and a truly alien world.”—BookPage