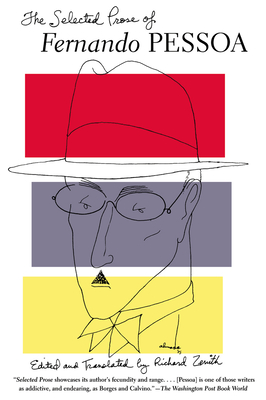 A Washington Post and Los Angeles Times Best Book of the YearThough known primarily as a poet, Fernando Pessoa, a writer of "remarkable genius" (Washington Post) wrote prose widely, in several languages and in every genre. Now newly expanded and revised by award-winning translator and Pessoa biographer Richard Zenith, The Selected Prose of Fernando Pessoa spans fiction and drama, playful intellectual inquiry, Platonic dialogue, and bitter intellectual scrapping between Pessoa and his many literary alter egos ("heteronyms"). In these pieces, the heteronyms launch movements and write manifestos, and one of them attempts to break up Pessoa's only known romantic relationship. Also included is a generous selection from Pessoa's masterpiece The Book of Disquiet. This is an important record of a crucial part of the literary canon."A modern master to rank alongside Joyce, Kafka, Beckett."--Sunday Times (UK)"Beautifully translated, compact while appropriately diverse." --Los Angeles Times" A] delightful collection . . . Pessoa] is the modernist's modernist: an inspired amalgam of Lewis Carroll, Aristophanes, Erasmus, Voltaire." --Washington Times

FERNANDO PESSOA was born in Lisbon and spent his adult life there, earning a modest living as a commercial translator. Most of his vast body of work was published posthumously. A writer and renowned translator, RICHARD ZENITH has received grants from the Guggenheim Foundation and the National Endowment for the Arts.