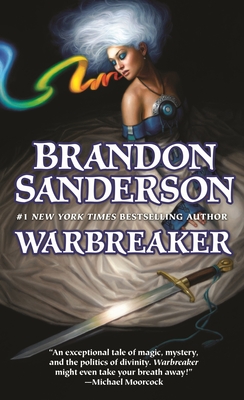 From the author of the connected universe of the Cosmere comes the standalone novel from which spring characters who later play roles in the #1 New York Times bestselling Stormlight Archive.

In the world of Warbreaker, each person is born endowed with the power of one Breath—which can be sold and collected by others, then used to Awaken objects and even corpses to do their bidding. A few individuals who die in glory return as gods, with the power of thousands of Breath, but no memory of their mortal lives—and are enthroned in the Court of Gods in Hallandren’s capital. To Vivenna and Siri, princesses of Idris, the abuse of Breath and the claim of the Returned to be gods are repugnant blasphemy. But with one princess wed to the God King of their nation’s enemies in a bid for peace, the other finds she must rely on Breath-using mercenaries to try to rescue her sister from her monstrous husband.

Lightsong the Bold, a lesser god who doubts his own religion, starts investigating mysterious murders in the Court of Gods and uncovers haunting clues to his own forgotten past. He is one of four gods who controls the army of Awakened Lifeless soldiers, and one faction is inciting an invasion of Idris despite the marriage treaty. Vasher—wielder of the sapient sword Nightblood—works behind the scenes against the declaration of war, but Lightsong’s visions of bloodshed prophesy its inevitability. Can the new queen, unaware of her sister’s imminent rescue attempt, persuade Lightsong and also somehow get through to the aloof God King—who she has been forbidden to speak to or even look in the eyes—before her homeland is destroyed?

Other Tor books by Brandon Sanderson

The Mistborn trilogy
Mistborn: The Final Empire
The Well of Ascension
The Hero of Ages

Mistborn: The Wax and Wayne series
Alloy of Law
Shadows of Self
Bands of Mourning

Other books by Brandon Sanderson

Brandon Sanderson grew up in Lincoln, Nebraska. He lives in Utah with his wife and children and teaches creative writing at Brigham Young University. He is the author of such bestsellers as the Mistborn® trilogy and its sequels, The Alloy of Law, Shadows of Self, and The Bands of Mourning; the Stormlight Archive novels The Way of Kings and Words of Radiance; and other novels, including The Rithmatist, Steelheart, and Skyward. In 2013, he won a Hugo Award for Best Novella for The Emperor's Soul, set in the world of his acclaimed first novel, Elantris. Additionally, he was chosen to complete Robert Jordan's Wheel of Time® sequence.

“Not only has Sanderson drawn a freshly imagined world and its society, he has also given us a plot full of unexpected twists and turns. . . . Anyone looking for a different and refreshing fantasy novel will be delighted by this exceptional tale of magic, mystery and the politics of divinity. Warbreaker might even take your breath away.” —Michael Moorcock

“Hilarious dialogue, descriptive action sequences, and genuinely sweet romance. . . . Sanderson knows how to wrap things up cleanly. He spins a world that's easily complex and mysterious enough to warrant sequels, but prefers to end it climactically, answering many of his biggest questions, while leaving others to the imagination.” —The Onion on Warbreaker

“Sanderson is clearly a master of large-scale stories, splendidly depicting worlds as well as strong female characters. . . . May the author write long and prosper.” —Booklist on Warbreaker

“A highly readable and compelling stand-alone volume from the acclaimed author of the Mistborn trilogy. . . . Highly recommended to fans of epic fantasy.” —The Romantic Times BOOKreviews 4 ½ Stars TOP PICK!