Van Gogh and the Artists He Loved (Hardcover) 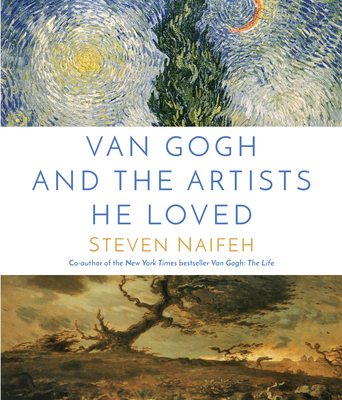 The compelling story of how Vincent van Gogh developed his audacious, iconic style by immersing himself in the work of others, featuring hundreds of paintings by Van Gogh as well as the artists who inspired him—from the New York Times bestselling co-author of Van Gogh: The Life

Vincent van Gogh’s paintings look utterly unique—his vivid palette and boldly interpretive portraits are unmistakably his. Yet however revolutionary his style may have been, it was actually built on a strong foundation of paintings by other artists, both his contemporaries and those who came before him.

Now, drawing on Van Gogh’s own thoughtful and often profound comments about the painters he venerated, Steven Naifeh gives a gripping account of the artist’s deep engagement with their work. We see Van Gogh’s gradual discovery of the subjects he would make famous, from wheat fields to sunflowers. We watch him experimenting with the loose brushwork and bright colors used by Édouard Manet, studying the Pointillist dots used by Georges Seurat, and emulating the powerful depictions of the peasant farmers painted by Jean-François Millet, all vividly illustrated in nearly three hundred full-color images of works by Van Gogh and a variety of other major artists, including Claude Monet, Paul Gauguin, and Henri de Toulouse-Lautrec, positioned side by side.

Thanks to the vast correspondence from Van Gogh to his beloved brother, Theo, Naifeh, a Pulitzer Prize winner, is able to reconstruct Van Gogh’s artistic world from within. Observed in eloquent prose that is as compelling as it is authoritative, Van Gogh and the Artists He Loved enables us to share the artist’s journey as he created his own daring, influential, and widely beloved body of work.

A graduate of Harvard Law School, Steven Naifeh studied art history at Princeton and Harvard’s Fogg Art Museum. Together with his late husband and co-author Gregory White Smith, he is the author of five New York Times bestsellers, including Van Gogh: The Life. Their biography Jackson Pollock: An American Saga won the Pulitzer Prize and inspired the Academy Award–winning film Pollock as well as John Updike’s novel Seek My Face. Naifeh, also an artist whose works are included in numerous museum collections, has been profiled in The New Yorker, The New York Times, and USA Today and has appeared twice on 60 Minutes. He lives in South Carolina.

“A captivating look inside the mind of Vincent van Gogh . . . Naifeh lucidly traces the painter’s relationship with everything from 17th century works by Rembrandt (who, like Van Gogh, had a penchant for ‘obsessively’ painting himself) to experimenting with the Pointillist dots of Georges Seurat (which, Naifeh writes, ‘freed Van Gogh from the unforgiving linearity of realism’) to his fascination with Japanese woodblock prints. . . . While illuminating the life of one of the world’s most significant artists, this also sheds a broader light on the fascinating nuances of the creative process.”—Publishers Weekly (starred review)

“A celebration of one of the world’s greatest artists and the works that inspired him. . . . Handsome . . . with learned explanations, dozens of beautiful reproductions, and an especially moving essay about the author and his husband of 40 years, scholar Gregory White Smith, who died in 2014, and their love of art. An accessible, heartfelt introduction to Van Gogh’s work and life.”—Kirkus Reviews

“Van Gogh and the Artists He Loved is a profusely illustrated musée imaginaire, representing Vincent’s ideal museum. It is a volume which the artist would have loved to have had by his bedside table. Naifeh, along with his companion the late Gregory White Smith, was the co-author of the 2011 best-selling biography Van Gogh: The Life—so he draws upon great accumulated knowledge.”—The Art Newspaper

“Continuing Steven Naifeh’s work that began with the landmark biography Van Gogh: The Life, his important new book, Van Gogh and the Artists He Loved, illuminates Van Gogh’s remarkable journey to becoming an artist. Richly illustrated, it inspires us to look at him and his art afresh by revealing his deep admiration and affection for the artists who inspired him.”—Dr. Chris Stolwijk, general director, RKD–Netherlands Institute for Art History, and co-author of Vincent’s Choice and Van Gogh and the Colors of the Night