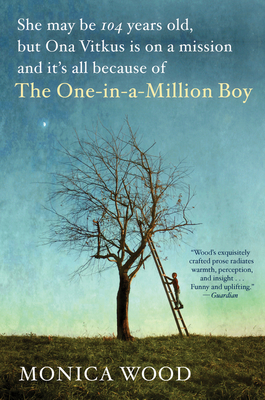 Fantastic and heart-warming story.  Full of unlikely friendships, second chances, and warm characters.  This is a fun read especially if you liked Man Called Ove.

— From What Karin is Reading Archive

This short novel is simple in its prose and vivid in its description of the forests and fiords of Norway. Told from the main character’s point of view, Trond takes a melancholy look back at his youth with its tragedies, mishaps and time spent with his father. Pettersen artfully switches between the present and past so the reader feels the depth of the events that have shaped the protagonist’s choice to live his last days in an isolated cabin far away from people, but not memories.This is the second time I have read this book and enjoyed it even more this reading!

“Despite its themes of loss, love, and aging, The One-in-a-Million Boy is a hopeful novel. Musician and mostly absent dad Quinn Porter honors his dead son's Boy Scout agreement to help 104-year-old Ona Vitkus. As Quinn and Ona get to know each other, Quinn begins to understand his son -- and in some ways, himself -- for the first time. Heartfelt and charming!”
— Carol Schneck Varner (M), Schuler Books & Music, Okemos, MI

The story of your life never starts at the beginning. Don't they teach you anything at school?

So says 104-year-old Ona to the 11-year-old boy who's been sent to help her out every Saturday morning. As he refills the bird feeders and tidies the garden shed, Ona tells him about her long life, from first love to second chances. Soon she's confessing secrets she has kept hidden for decades.

One Saturday, the boy doesn't show up. Ona starts to think he's not so special after all, but then his father arrives on her doorstep, determined to finish his son's good deed. The boy's mother is not so far behind. Ona is set to discover that the world can surprise us at any age, and that sometimes sharing a loss is the only way to find ourselves again.

“Readers won’t be able to resist falling for Ona … The conclusion will leave them smiling through their tears.”—Shelf Awareness

​“Poignant … There is much to enjoy in this heartfelt tale of love, loss, and friendship.”—Express

MONICA WOOD is the author of When We Were the Kennedys: A Memoir from Mexico, Maine and of the novel Any Bitter Thing, a national bestseller and Book Sense Top Ten pick. Her other fiction includes Ernie's Ark and My Only Story, a finalist for the Kate Chopin Award. Her writing has appeared in O, The Oprah Magazine, New York Times, Martha Stewart Living, Parade, and many other publications. Wood lives in Portland, Maine.

“Wood (Any Bitter Thing, 2005) tells a simultaneously sad and joyous story of a unique eleven-year-old boy and the legacy he leaves behind. Known only as “the boy,” he has no friends, and spends his time obsessively compiling mental lists and memorizing countless Guinness world records. As part of his work to earn a Boy Scout badge, the boy does yard work for 104-year-old Ona Vitkus, a Lithuanian immigrant living nearby. They forge a close bond over the course of seven Saturdays, then the boy dies. His mostly absent musician father, Quinn, volunteers to finish the last three of the boy’s weekends. Quinn becomes aware of his son’s and Ona’s plan to get her into a Guinness records book—hopefully, as the oldest licensed driver—and this leads first to a road trip to find Ona’s only living son, now ninety, and eventually to a visit to her homeland at age 109. Wood’s portrait of a fractured, grieving family is peopled by endearing characters and should appeal to readers who enjoy the family-centered novels of Jodi Picoult and Kristin Hannah.” —Booklist

In The One-in-a-Million Boy, Monica Wood tells a magical, beautifully written story about the healing power of friendship, music, and unexpected, generation-spanning connections. As emotionally resonant as The Curious Incident of the Dog in the Nighttime, this novel hums with energy, warmth, wisdom, humor, and soul.“ —Christina Baker Kline, author ofOrphan Train