The Kingdom: A novel (Paperback) 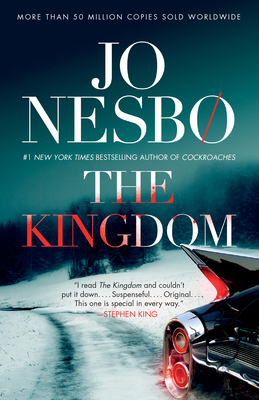 A tense and atmospheric standalone thriller about two brothers, one small town, and a lifetime of dark secrets, from bestselling author Jo Nesbø

“I read The Kingdom and couldn’t put it down ... Suspenseful ... Original ... This one is special in every way.” —Stephen King

A KIRKUS REVIEWS BEST MYSTERY AND THRILLER OF THE YEAR

Roy and Carl, brothers from a small mountain town, have spent their whole lives hiding from the darkness in their pasts—Roy by staying put and staying quiet, and Carl by running far away. Roy believed his little brother was gone for good. But Carl has big plans for his hometown. And when he returns with a mysterious new wife and a business opportunity that seems too good to be true, simmering tensions begin to surface and unexplained deaths in the town’s past come under new scrutiny. Soon powerful players set their sights on taking the brothers down by exposing their role in the town’s sordid history. But Roy and Carl are survivors, and no strangers to violence. As the town’s long-buried past begins to surface, Roy will be forced to choose between his own flesh and blood and a future he had never dared to believe possible.

JO NESBØ is a musician, songwriter, economist, and #1 New York Times best-selling author. He has won the Raymond Chandler Award for Lifetime Achievement as well as many other awards. His books have sold 45 million copies worldwide and have been translated into fifty languages. His Harry Hole novels include The Redeemer, The Snowman, The Leopard, Phantom, and most recently Knife, and he is also the author of The Son, Headhunters, Macbeth, and several children's books. He lives in Oslo.

A KIRKUS REVIEWS BEST MYSTERY AND THRILLER OF THE YEAR

“Intricately plotted . . . With The Kingdom, Nesbø builds a slow-burn thriller that leaps to myriad twists as he peels back the brothers' strong relationship, which is partially built on terrible secrets and tinged with violence.” —Oline Cogdill, South Florida Sun-Sentinel

“The Kingdom, like most Jo Nesbo novels, is rooted in crime, mystery and the exploration of long-held dark secrets . . . Vivid characters speak dialogue that is always pungent and convincing . . . Mr. Nesbo explores the depths of the human psyche, along with more mundane foibles of a closed society. One of the more interesting questions, not resolved until the end, is just who will survive.” —Robert Croan, Pittsburgh Post-Gazette

“The Kingdom, much like a rollercoaster begins slowly as Nesbo sets the stage and explains the intricate web of connections all of the characters have with each other after living in a small town together for decades. Once all of the characters are in place, Nesbo flips the switch and sends readers hurdling along the track as he reveals the numerous crimes the brothers have committed and the motives that led them along their path.” —Hearst Connecticut Media Group

“Our current love affair with Nordic noir continues unabated, and the Norwegian writer Jo Nesbo is a virtuoso of the genre . . . His latest crime thriller, The Kingdom, is set in a small mountain town, where a mechanic’s life is upended by the unexpected homecoming of his younger brother, his brother’s mysterious wife, and the unspooling of chilling family secrets.” —Avenue Magazine

“Nesbo is always a great storyteller. The world he depicts is bleak and potentially depressing, but he presents it with relentless power.”  —John M. Clum, New York Journal of Books

“The Kingdom [is] in some ways more American in tone than Scandinavian . . . [it] picks up speed, until Roy is swept up in the momentum of his own story.” —The New York Times Book Review

“ [A] richly characterized, perfectly paced and plotted thriller.” —The Lineup

“For mystery readers in search of heroes a shade darker than Agatha Christie’s Hercule Poirot, enter . . . Jo Nesbø . . . The Kingdom, Nesbø’s new standalone story, sees him peeling back layers of unnerving secrets surrounding a pair of brothers in Oslo, from their parents’ mysterious deaths to their family’s disturbing history and the secrets of their hometown.” —TIME, “The 42 Most Anticipated Books of Fall 2020”

“The Kingdom is a complex and simmering standalone novel from the author of the popular Harry Hole detective series, and it dives deeply into the psyches of its characters. Twisty, violent, gripping, and very disturbing.” —Buzzfeed

“Captivating . . . Guaranteed to be in high demand. As the story unfolds, it builds in dread and depravity. The small-town atmosphere resembles a Peyton Place as envisioned in an unlikely collaboration between Raymond Chandler and Henrik Ibsen. The complex characters and twisting plot will keep readers turning the pages and eager to discuss.” —Library Journal

“Echoes of such classic noir authors as Dorothy B. Hughes, James M. Cain, and Jim Thompson … Nesbø brilliantly uses the insularity of Roy’s world, both internally and externally, to accentuate the Shakespearean inevitability of the impending tragedy.”—Booklist (starred review)

“Nesbø peels away the secrets surrounding Carl’s project, his backstory, and his connections to his old neighbors so methodically that most readers, like frogs in a gradually warming pan of water, will take quite a while to realize just how extensive, wholesale, and disturbing those secrets really are. The illusions of a family and its close-knit town constructed and demolished on a truly epic scale.” —Kirkus (starred review)

“Twisty … Fans of classic noir such as Double Indemnity will be hooked.” —Publishers Weekly