Stony the Road: Reconstruction, White Supremacy, and the Rise of Jim Crow (Paperback) 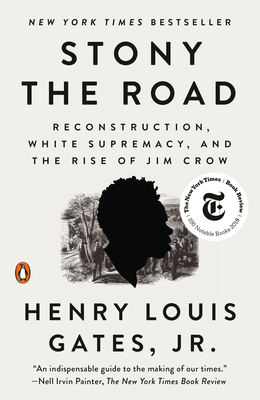 “Stony the Road presents a bracing alternative to Trump-era white nationalism. . . . In our current politics we recognize African-American history—the spot under our country’s rug where the terrorism and injustices of white supremacy are habitually swept.  Stony the Road lifts the rug." —Nell Irvin Painter, New York Times Book Review

A profound new rendering of the struggle by African-Americans for equality after the Civil War and the violent counter-revolution that resubjugated them, by the bestselling author of The Black Church.

The abolition of slavery in the aftermath of the Civil War is a familiar story, as is the civil rights revolution that transformed the nation after World War II. But the century in between remains a mystery: if emancipation sparked "a new birth of freedom" in Lincoln's America, why was it necessary to march in Martin Luther King, Jr.'s America? In this new book, Henry Louis Gates, Jr., one of our leading chroniclers of the African-American experience, seeks to answer that question in a history that moves from the Reconstruction Era to the "nadir" of the African-American experience under Jim Crow, through to World War I and the Harlem Renaissance.

Through his close reading of the visual culture of this tragic era, Gates reveals the many faces of Jim Crow and how, together, they reinforced a stark color line between white and black Americans. Bringing a lifetime of wisdom to bear as a scholar, filmmaker, and public intellectual, Gates uncovers the roots of structural racism in our own time, while showing how African Americans after slavery combatted it by articulating a vision of a "New Negro" to force the nation to recognize their humanity and unique contributions to America as it hurtled toward the modern age.

The story Gates tells begins with great hope, with the Emancipation Proclamation, Union victory, and the liberation of nearly 4 million enslaved African-Americans. Until 1877, the federal government, goaded by the activism of Frederick Douglass and many others, tried at various turns to sustain their new rights. But the terror unleashed by white paramilitary groups in the former Confederacy, combined with deteriorating economic conditions and a loss of Northern will, restored "home rule" to the South. The retreat from Reconstruction was followed by one of the most violent periods in our history, with thousands of black people murdered or lynched and many more afflicted by the degrading impositions of Jim Crow segregation.

An essential tour through one of America's fundamental historical tragedies, Stony the Road is also a story of heroic resistance, as figures such as W. E. B. Du Bois and Ida B. Wells fought to create a counter-narrative, and culture, inside the lion's mouth. As sobering as this tale is, it also has within it the inspiration that comes with encountering the hopes our ancestors advanced against the longest odds.

“Stony the Road presents a bracing alternative to Trump-era white nationalism. . . . In our current politics we recognize African-American history—the spot under our country’s rug where the terrorism and injustices of white supremacy are habitually swept.  Stony the Road lifts the rug. . . . essential . . . a history that very much needs telling and hearing in these times.” —Nell Irvin Painter, New York Times Book Review

“[A] luminous history of Reconstruction, and the savage white backlash that derailed it. . . . Few authors approach such difficult history with the unblinking clarity of Gates, the esteemed Harvard professor, historian, and scholar . . . If anyone wants to understand how the groundbreaking election of Barack Obama as this nation’s first black president was answered with Donald Trump’s feral white nationalism, Gates has provided a road map.” —The Boston Globe

“Concise, powerful . . . an important addition to America’s evolving view of its own history.” –The Economist

“If you will read the first 38 pages of Stony the Road by Henry Louis Gates Jr., I believe several things are likely to happen: You will commit to reading the rest of the book. Any remaining illusions about a prevailing racial harmony you may have brought to the Trump era will dissipate. And on reflection, you’ll pretty much completely understand how we got into our national racial consciousness, as well as our current national political pickle.” —Martha's Vineyard Times

"The academics study the tides of history, while the popular historians go out fishing to find (and tag) the big fish that presumably make the ocean worth watching. The tidalists have the tenure, but the fishermen sell all the books. Gates, who is expert at both, catching fish while seeing tides, leaves us with a simple, implicit moral: a long fight for freedom, with too many losses along the way, can be sustained only by a rich and complicated culture. Resilience and resistance are the same activity, seen at different moments in the struggle. It’s a good thought to hold on to now." —Adam Gopnik, The New Yorker

“Lively . . . A compressed, yet surprisingly comprehensive narrative sweep . . . With a dazzling selection of cartoon stereotypes, the author shows that in the white-supremacist reaction ‘all along, the issue had been about the fabrication of hateful imagery in order to justify robbing black people of their constitutional rights and their economic potential.’” —The Washington Post

“Gates' book is a fascinating social and intellectual history of the time between Reconstruction and the rise of the Jim Crow period of American history. It's an absorbing and necessary look at an era in which the hard-fought gains of African-Americans were rolled back by embittered Southern whites — an era that, in some ways, has never really ended. . . . Gates' analysis is predictably brilliant, but he's also just a joy to read.” —NPR

"A timely chronicle of the battle to define blackness that raged from the Civil War through civil rights . . . Gates, whose own portrait hangs in the Smithsonian's National Portrait Gallery, writes not only as a scholar of this culture war but as an influential participant." —Julian Lucas, Harper’s

“Insightfully demonstrates how history repeats itself . . . This excellent text, augmented by a disturbing collection of late-19th- and early-20th-century racist images, is indispensable for understanding American history.” —Publishers Weekly, starred review

“A provocative, lucid, and urgent contribution to the study of race in America. “ —Kirkus Reviews, starred review

“In Stony the Road, Gates demonstrates his chops as a lyrical narrative historian. He surveys an era full of pain and loss but also human persistence and astonishing cultural renewal in African American life. Reconstruction and its long aftermath down to the 1920s was a series of revolutions and counter-revolutions and Gates's success here is in telling it as a moving and complex story about politics, science, art, and ideas all wrapped in one form after another of racism, managed and blunted by resistance. White supremacy triumphs in this long dark era; it left many casualties along the by-ways of America's worst sins. But this is a work that shows that good history can also rise up as a redemption song when we know the facts of what happened and why and how people endure, thrive and create their own new worlds.” —David W. Blight, Yale University, and author of Frederick Douglass: Prophet of Freedom

“In this insightful, provocative book, Henry Louis Gates, Jr., reminds us how the hopes inspired by emancipation and Reconstruction were dashed by a racist backlash, and how a new system of inequality found cultural expression in Lost Cause mythology and degrading visual images of African Americans. With debate raging over how we should remember the Confederacy, and basic rights again under threat, this unflinching look at our history could not be more timely.” —Eric Foner, DeWitt Clinton Professor Emeritus of History, Columbia University, and author of Reconstruction: America's Unfinished Revolution and the forthcoming The Second Founding: How the Civil War and Reconstruction Remade the Constitution

“How does white supremacy work? What does it look like? In this piercing, haunting study, Henry Louis Gates, Jr., chronicles an American tragedy, the story of how white supremacy and Jim Crow became the South’s—and white America’s—brutal answer to Emancipation and Reconstruction. Who has best dismantled white supremacy, and how? Gates tells those powerful stories, too, from Frederick Douglass to Ida B. Wells to W. E. B. DuBois, through generations of New Negroes, and New, New Negroes, battling back, in struggles not yet ended.” —Jill Lepore, author of These Truths: A History of the United States

“Stony the Road, a must-read post Reconstruction history from one of the foremost historians of our time, proves that the past can be prologue. It is the history we are doomed to repeat if we remain unwilling to build a democracy at peace with itself in America, a democracy that respects the dignity and worth of every human being.”  —Rep. John Lewis

“Drawing on the finest current scholarship, Henry Louis Gates, Jr., offers a chilling account of Reconstruction's overthrow and the rise of American apartheid. His book then forcefully recasts the rise of the concept of the New Negro as a weapon in the war against a resurgent white racism and the phantasmagoria of Jim Crow popular culture that was all too real and all too pervasive. As elements of that culture persist, Stony the Road is all the more timely.” —Sean Wilentz, author of Bancroft Prize winner The Rise of American Democracy

"With vivid frankness, Henry Louis Gates, Jr., confronts how the creation of the mythical 'Old Negro,' a subordinate, nearly undercut black America's best hopes. Redemption only came through African American self-invention. The 'New Negro' was a citizen who carved out a way forward with brilliance and beauty as expressed in pictures, politics, and prose. With the lyrical grace of a storyteller and the sage insight of a master teacher, Professor Gates's Stony the Road tells how one people's struggle came to define the best of America's ideals." —Martha S. Jones, Society of Black Alumni Presidential Professor at Johns Hopkins University and author of Birthright Citizens

“In [Gates’s] signature lucid and compelling approach to history . . . a fresh, much-needed inquiry into a misunderstood yet urgently relevant era.” — Booklist, starred review